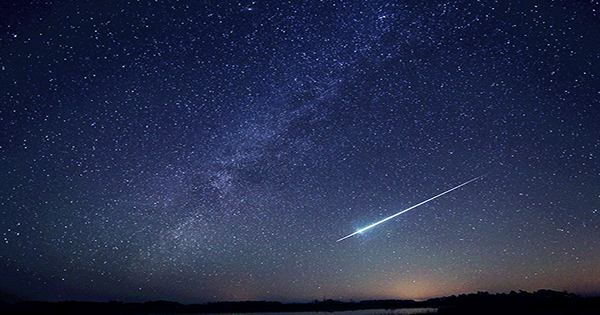 In the northern hemisphere, the Winter Solstice occurs today, December 21. Soon, the days will get longer and brighter. If you want a little extra light during the dark hours, go outside and check for the Ursids meteor shower, which peaks in the early morning hours of December 22.

This shower is only visible in the Northern Hemisphere, and it seems to emanate from Ursa Minor (the tiny bear) or the “Little Dipper,” which focuses on the brighter stars of Ursa Minor. The radiation point is just 14 degrees from Polaris, often known as the North Star, the constellation’s most prominent star.

The Ursids are an active shower, with average rates of 10 meteors per hour and rare outbursts of 50 per hour, however, this is not expected this year. The Moon is declining but still 90% full, making it a little more difficult to view meteors, especially if you live anywhere with light pollution. The good news is that the radiant never sets if you are above 14 degrees north latitude, so you can see it all night.

The comet 8P/Tuttle, which circles the Sun every 13.6 years, is the Ursids’ parent body. Its closest approach to the Sun was in August of last year, but there does not appear to be a link between its perihelion and spike inactivity. Even so, a few meteors are preferable to none. If you do not want to wait until later in the evening, you might be able to see Comet Leonard using a decent binocular.

The Ursid meteor shower is named after the Big and Little Dipper asterisms, which are located in the constellations Ursa Major and Ursa Minor. All meteors in yearly showers have radiant points, as you may know; the showers are named for the constellations in which their radiants are located. The Ursid meteors appear to emanate from the part of sky designated by the Little Dipper star Kochab if you follow their travels backward.

At approximately 1 a.m. local time, the Big Dipper and the star Kochab may seen way up in the north-northeast if you view from a Northern Hemisphere location around the time of the solstice. This is around the time of night when you should begin monitoring the meteor shower. The Little Dipper is circumpolar from far-northern latitudes (for example, in Canada) (out all night). At nightfall, the star Kochab will see below Polaris, the North Star. Kochab (and all the Little Dipper stars) move counterclockwise around Polaris during the night, reaching its highest position for the night in the hours before dawn.

Look Up, there’s a “Blue Moon” Rising this Weekend