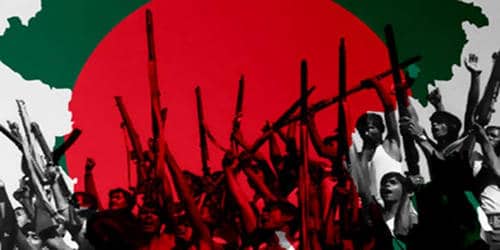 Victory day means the day of success that a nation has won in a battle against the oppressors. The 16th of December is a red-letter day in the history of Bangladesh because it is the day of victory over the barbarous Pak Army. On this day in 1971, we achieved independence from the oppression of Pakistani rule. It is not only a day of enjoyment but also a day of sorrow. It is the day when the long-cherished freedom came into being. It also makes us remember our heroic sons and daughters who laid their lives to bring freedom.

On the 16th of December 1971, Bangladesh came out as an independent nation. It is the day when the long-cherished freedom came into being. Sheikh Mujibur Rahman declared the independence of Bangladesh on the night of the 25th March 1971, against the inhuman attack of Pak military. The brutal Pakistani army began an inhuman attack on innocent people and many of our intellectuals and tortured innumerable women. He called the people of Bangladesh to face the Pak military junta with courage and determination, on the 27th March 1971, and then the Major Ziaur Rahman read out the proclamation of independence through the radio on behalf of Sheikh Mujibur Rahman. Our brave sons could not tolerate this inhumane attack. Both males and females from all portions of our society started a bloody struggle against the Pakistani rulers. People from all walks of life launched a strong resistance to the enemy force. The people of East Pakistan were deprived of their rights and fought for them. Thousands of valiant sons of this soil including armed forces laid down their lives for freedom. Pak military killed thousands of men and children, ransacked innumerable houses and looted their belongings. During the nine months-long war, we lost thousands of innocent lives including women and children. Mukti Bahini along with allied forces from India inflicted the final attack on the Pak army. They were surrounded by all sides on the 16th of December 1971. At the cost of huge blood-shed, we won the victory. Thus the people of Bangladesh have brought independence from the oppressive Pakistani rulers. When the people heard this news of the surrender, they came out of their houses with processions chanting different slogans. Some people came out in tears remembering the loss of their near and dear ones.

The 16th of December is the day of victory of the right cause against injustice and tyranny. The sacrifice of those martyrs is a great inspiration for us. Their memory moves us with patriot feelings and inspires us to stand for the interest of our country. No oppressor can rule his people for a long time. Sixteenth December will be celebrated every year as a victory day as long as Bangladesh exists. The victory day symbolizes the triumph of justice over tyranny, of truth over falsehood. This serves a source of inspiration for the people. So the 16th of December is a very important day in the history of Bangladesh.

How Multi-Color Mutants Can Help Save Cotton Planets