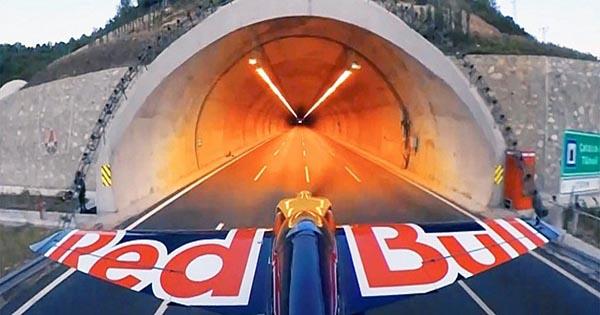 Last weekend, aviation history was made when a pilot flew through a tunnel at a blazing speed of 245 kilometers (152 miles) per hour, smashing many records.

On Saturday, September 4, 2021, Dario Costa, a 41-year-old Italian stunt pilot, flew in an aircraft through two of the atalca Tunnels — one after the other — nears the Turkish metropolis of Istanbul shortly after sunrise. Take a look at the footage of the nerve-wracking flight below. This is the first time an airplane has flown through a tunnel, as well as the first airplane, fly through two tunnels and the longest flight beneath a solid object (it doesn’t matter if you did it on GTA). With a length of 1,730 meters, the achievement, sponsored by Red Bull, also set a Guinness World Record for the longest tunnel flown through in an airplane (5,675 feet). The tunnel’s narrow confines provided little room for error. To prevent crashing, Costa’s jet had to keep a distance of 70 centimeters to 1.6 meters (2 to 5 feet) above the tarmac. The distance between the wingtip and the wall on each side was only 4 meters (13 feet) on average.

The 360-meter (1,181-foot) open-air gap between the two tunnels was another crucial part of the journey. While this may appear to be the easiest part of the journey, Costa had to contend with crosswinds and prepare for the next thread into the second tunnel.

“Everything appeared to be moving at breakneck speed, but when I emerged from the first tunnel, the plane began to veer to the right due to crosswinds, and everything in my head slowed to a crawl “Costa made the announcement in a statement.”I reacted quickly and concentrated only on putting the plane back on track to enter the other tunnel. Then everything sped up in my head all over again.”

The plane has to be in excellent condition as well. The plane was a Zivko Edge 540 V2 with several modifications for the flight, including a Formula One-style seat, weight savings, and synthetic “sharkskin” to reduce drag and improve efficiency.

The flight, however, was as much a feat of human achievement as it was an engineering achievement. Costa was allowed to drive a car through the tunnel at 270 kilometers per hour (167 miles per hour) ahead of his attempt to obtain a “feel” for the journey and was trained on various different simulations on top of his 5,000 flight hours of experience.

He also received neuropsychological training at the Red Bull Athlete Performance Center to guarantee he had lightning-fast reaction times. Costa is now a multi-world record holder and a very happy individual as a result of his efforts.

“I’d never flown in a tunnel in my life – no one had ever done it – so there was a big question mark in my mind about whether everything would work as planned,” Costa explained. “Of course, it was a huge relief, but the overriding emotion was huge huge happiness. It’s another dream come true for me.”