Bangladesh is one of the most populated countries in the world. As the growth of the urban population increases at an exceptionally rapid rate, its cities are being unable to cope with the situation due to their internal resource constraints and management limitations. In recent years, the megacities of Bangladesh, such as Dhaka and Chittagong have faced extensive water logging during the monsoon. Common problems during this period are an increase in water pollution, traffic congestion, air and noise pollution, solid waste disposal, etc. This is not only a problem in Dhaka but also in other cities such as Chittagong, Khulna, Barisal, and other populated and less populated cities that have all been cruel victims of water logging. 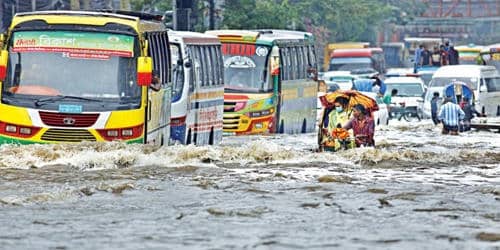 The government has failed to maintain any control over unauthorized and unplanned development that is occupying canals and water bodies in and around cities. They do not even bother to supervise the digging of roads during monsoon by WASA, Rajuk, City Corporation, and other private developers. People of megacities like Dhaka, Chittagong, and other populated cities have valid reasons to be worried as it is they who suffer from problems caused by water logging. Even due to slight rainfall, roads sometimes become unusable.

Key to the solution: In order to eradicate this problem, the natural drainage system has to be restored. Road construction and other public facility-based work should be undertaken at proper times and must be finished before the arrival of the rainy season. Unauthorized filling of canals must be stopped, and those responsible must be punished. The government should take proper measures to ensure these criteria are being fulfilled. It is up to our honorable government to immediately address the problem and relieve the population of cities such as Dhaka and others from the serious sufferings they have to endure because of water logging.