Home Business What Is Privatization? 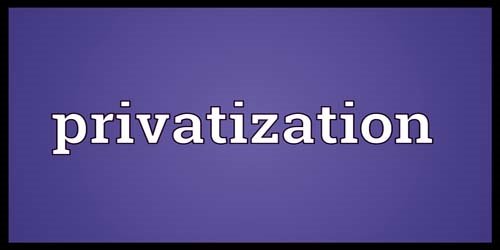 Privatization is the process of transferring an enterprise or industry from the public sector to the private sector. Note that privatization also describes the transfer of business from a company to a privately held business. This is referred to as corporate privatization. It is also used as a synonym for regularization when a heavily regulated private entity or industry is less regulated. Government functions and services may be privatized (also known as “franchising” or “outsourcing”); In this case, the non-governmental organizations are given the responsibility of implementing government programs or performing the functions of government services that were previously the scope of state-run organizations. Privatization may involve the sale of government-owned assets or the removal of restrictions that prevent individuals and businesses from participating in a particular industry. Government agencies typically conduct operations and industries within the public sector. In the United States, the public sector includes the U.S. Postal Service, public school and university systems, as well as the National Parks Service. Proponents of privatization say competition in the private sector promotes the more efficient practice, which ultimately results in better services and products, lower prices and less corruption. On the other hand, critics of privatization argue that some services – such as healthcare, utilities, education, and law enforcement – should be in the public sector to enable greater control and ensure more equitable access.

Describes the process of privatization through which a part of property or business is transferred from government ownership to private ownership. In the case of a for-profit company, the shares are no longer traded on the stock market, as the company becomes private through private equity; A partial or full sale of a state-owned enterprise or a municipal-owned corporation may be a public market transaction for the first time in the case of private ownership shares, or for the first time since the previous nationalization of the enterprise. Proponents of privatization argued that privately-owned companies conduct business economically and efficiently because they encourage profits to eliminate unnecessary expenses. These entities can also be described as private. Privatization may mean that the government sells state-owned businesses for personal gain, but it can also be discussed in the context of privatization of services or private entities, where private entities are given the responsibility of implementing government programs or performing public service functions. In certain states and municipalities, liquor stores and other non-profit businesses are run by the public sector, as a source of income. However, contrary to the initial understanding of privatization, the company in question will start with the private sector and is there.

To Raise a Fund, This Agtech Outfit Built a Content Company First (Now It Has $60 Million to Put To Work)