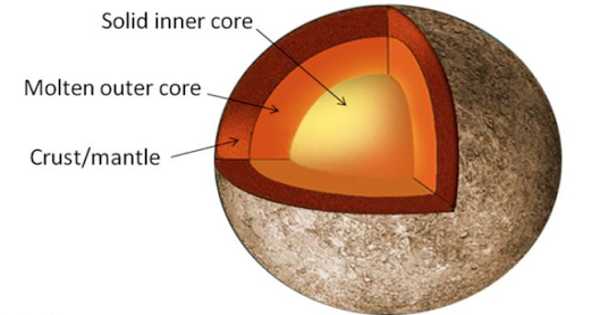 A new study challenges the widely held belief that Mercury has a large core in comparison to its mantle (the layer between a planet’s core and crust). For decades, scientists contended that hit-and-run collisions with other bodies during the formation of our solar system blew away much of Mercury’s rocky mantle, leaving only the large, dense metal core inside. However, new research indicates that it is the sun’s magnetism that is to blame, not collisions.

A model developed by William McDonough, a geology professor at the University of Maryland, and Takashi Yoshizaki of Tohoku University shows that the density, mass, and iron content of a rocky planet’s core are influenced by its distance from the sun’s magnetic field. The model was described in a paper published in the journal Progress in Earth and Planetary Science.

“Our solar system’s four inner planets — Mercury, Venus, Earth, and Mars — are made up of different proportions of metal and rock,” McDonough explained. “As the planets move further away from the sun, the metal content of their cores decreases. The distribution of raw materials in the early forming solar system was controlled by the sun’s magnetic field, according to our paper.”

A new study disputes the prevailing hypothesis on why Mercury has a big core relative to its mantle. For decades, scientists argued that hit-and-run collisions blew away much of Mercury’s rocky mantle and left the big, dense, metal core inside.

McDonough previously developed a model for Earth’s composition that planetary scientists commonly use to determine the composition of exoplanets. (His seminal paper on the subject has been cited over 8,000 times.)

McDonough’s new model suggests that during the early stages of our solar system’s formation, when the young sun was surrounded by a swirling cloud of dust and gas, grains of iron were drawn toward the sun’s magnetic field. When planets began to form from clumps of that dust and gas, those closest to the sun incorporated more iron into their cores than those further away.

The density and proportion of iron in the core of a rocky planet correlate with the strength of the magnetic field around the sun during planetary formation, according to the researchers. Their new research suggests that magnetism should be taken into account in future attempts to describe the composition of rocky planets, including those beyond our solar system.

The composition of a planet’s core is critical to its ability to support life. For example, on Earth, a molten iron core generates a magnetosphere that shields the planet from cancer-causing cosmic rays. The core also contains the majority of the planet’s phosphorus, which is essential for the survival of carbon-based life.

McDonough calculated the speed at which gas and dust were drawn into the center of our solar system during its formation using existing models of planetary formation. He calculated how the magnetic field generated by the sun as it exploded into existence would draw iron through the dust and gas cloud.

As the early solar system cooled, dust and gas that had not been drawn into the sun clumped together. The clumps closer to the sun would have been subjected to a stronger magnetic field, containing more iron than those farther away from the sun. Gravitational forces drew the iron into the cores of the spinning planets as the clumps coalesced and cooled.

When McDonough applied this model to planetary formation calculations, he discovered a gradient in metal content and density that corresponds perfectly with what scientists know about the planets in our solar system. Mercury has a metallic core that accounts for approximately three-quarters of its mass. Earth and Venus have cores that are only about one-third of their total mass, and Mars, the most distant of the rocky planets, has a small core that is only about one-quarter of its total mass.

Because there is currently no method to determine the magnetic properties of a star from Earth-based observations, this new understanding of the role magnetism plays in planetary formation puts a kink in the study of exoplanets. The spectrum of light emitted by an exoplanet is used by scientists to infer its composition. Because different elements in a star emit different wavelengths of radiation, measuring those wavelengths reveals what the star and, presumably, the planets around it are made of.

“You can’t just say, ‘Oh, the composition of a star looks like this, so the planets around it must look like this,'” says one researcher. McDonough explained. “Now you have to say, ‘Each planet could have more or less iron depending on the magnetic properties of the star during the early development of the solar system.'”

The next step in this research will be for scientists to locate another planetary system similar to ours, one with rocky planets spread out over large distances from their central sun. Researchers could confirm this new theory and infer that a magnetic field influenced planetary formation if the density of the planets drops as they radiate out from the sun, as it does in our solar system.