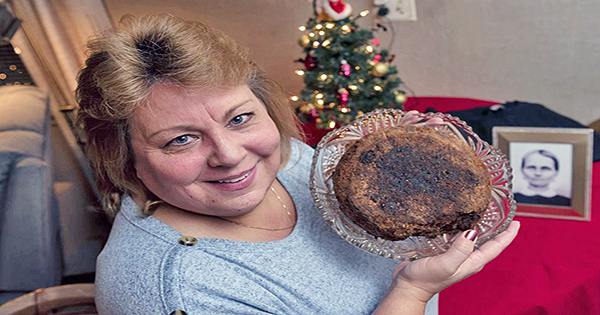 On the night of March 28, 1942, only hours before the historic cathedral’s bells tolled in Palm Sunday, British Royal Air Force aircraft descended on Lübeck, Germany. Although the Nazis had razed scores of British cities in previous years’ Blitzkrieg battles, it was the first big British air attack on a German city. The 400 or so tons of bombs delivered by the bombers demolished three major churches, displacing 25,000 people, and destroying the city’s historic center in an inferno.

However, a cake was saved. The 79-year-old dish is still recognized as an almond and hazelnut cake, replete with all of its original decorative detail, including swirly frosting on top, even if it does not look as tasty as it once did. The delectable item was discovered in a Lübeck cellar, alongside a full coffee service that had been prepared for the family’s Palm Sunday breakfast. The cake remained wrapped in wax paper, which the maker hoped would keep it fresh.

In a statement regarding the discovery, local excavation manager Lisa Renn remarked, “[The cake] is highly burnt and covered with soot on the outside.” “It’s only a third of its original height due to the heat.”

The family of a local merchant named Johann Wärme lived in the property on Alfstrasse where the cake was discovered. Because the kitchen was in the basement, the cake was shielded by the layers of debris above it when the home was bombed. According to the excavation team, what has left is a picture of life in a medieval German city 80 years ago. For the morning’s celebrations – possibly a customary confirmation ceremony – an elaborately adorned cake and coffee service were set out. Several vinyl records, including Beethoven’s Moonlight Sonata and symphony no. 9: symphonie avec chur en ré mineur, were discovered among the relics, as was the planned musical entertainment.

Despite the fact that this is the first intact cake discovered in the hanseatic city of Lübeck, the city well known for its archeological discoveries, It was founded in 1143 and, because of its exceptionally well-preserved medieval core, is currently Germany’s largest UNESCO World Heritage Site. According to Dirk Rieger, head of the Department of Archaeology for the Hanseatic City of Lübeck Historic Monuments Protection Authority, “the subsurface is made of clay, thus the preservation for organic material is spectacular.” “Dig down 7 meters (23 feet) and you’ll find yourself in the 1100s. Every single aspect of urban and mercantile activity from the eight or nine centuries has been maintained in a way that is utterly unique.”

Rieger told LiveScience that “anything from tiny children’s shoes to full medieval ships” has been discovered in digs around the city, but the cake seems to have struck a particularly poignant chord among the local archaeologists. “These exceptional contemporary witnesses… took 79 years to come to light again,” said Doris Mührenberg, the director of the city’s archaeological storerooms. “Through their transience and brittle materiality, they [represent] the precise instant of annihilation… They were completely unknown, and no one even knew they existed.” It does not quite match the 100-year-old fruitcake discovered in 2017 by Scott of the Antarctic, but few things provide a glimpse of genuine life, reminding us that folks living through history were actual people, like a simple cake.