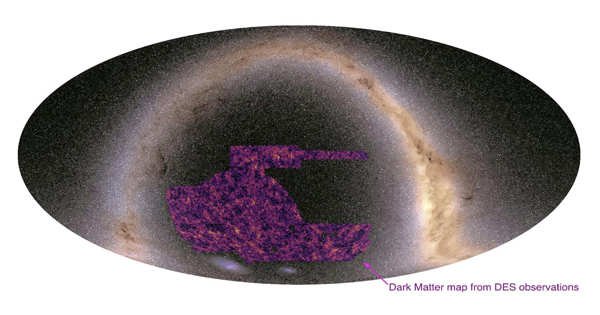 The Dark Energy Survey collaboration, which includes over 400 scientists from 25 institutions, including UArizona, has completed the universe’s largest-ever map. The data, which detail the distribution and shapes of galaxies over a distance of more than 7 billion light-years, provide researchers with a record of how the universe evolved over time. Astronomers used the largest sample of galaxies ever observed, covering nearly one-eighth of the sky, to produce the most precise measurements of the universe’s composition and growth.

The first three years of Dark Energy Survey (DES) data have been published. Astronomers used data from over 226 million galaxies to create the most comprehensive map of galaxy distribution ever created, extending more than 7 billion light-years into the cosmos. Astronomers will breathe a sigh of relief when they see the results. The Standard Model of Cosmology, the main theory underlying our understanding of the universe, remains by far the best model of the universe.

According to the standard model, the universe is made up of three main components: regular matter, which is what we are made of; dark matter, an invisible substance that pervades everywhere and outweighs regular matter five to one; and dark energy, the most abundant component, which is responsible for the universe’s accelerated expansion.

Astronomers have used the largest sample of galaxies observed ever, covering nearly one-eighth of the sky, to produce the most precise measurements of the composition and growth of the universe.

“These analyses are truly cutting-edge, necessitating artificial intelligence and high-performance computing supercharged by the brightest young scientists,” said Scott Dodelson, a physicist at Carnegie Mellon University who co-chairs the DES Science Committee with Elisabeth Krause of the University of Arizona, in a statement. “What a privilege to be a part of this team.”

The findings of this massive data release have been published in 30 scientific papers, allowing astronomers and physicists to tighten the constraints on what we know about the enigmatic dark matter and dark energy, as well as the theory that requires them. The teams also compared the current results to a map of the cosmic microwave background (CMB), which was the first light to shine freely in the universe and is also used to test the standard model.

Thankfully, the data are consistent with each other and with the model. There is an ongoing tension in cosmology between the expectation from the CMB and the expectation from galaxies in the nearby universe. The DES has not discovered anything that is about to change our understanding, but it has revealed that the universe appears to be a little smoother than predicted by the CMB analysis.

“It would be very exciting to discover contradictions between galaxy surveys like DES and CMB analyses, as they would provide hints of new physics.” This observed difference in matter clustering could be one such contradiction, but more data will be needed to confirm it,” said Dr. Pablo Lemos (both UCL Physics & Astronomy and Sussex University), co-author of the new analysis paper.

The Standard Model remains firmly secure, but it will be tested as any theory should be. Because the data released by DES represents roughly half of the total number of observations made, more stringent tests will be conducted. The DES collaboration includes over 400 scientists from 25 institutions in seven countries.

“The collaboration is still in its infancy. It is heavily skewed toward postdocs and graduate students, who are doing a large portion of this work,” DES Director and spokesperson Rich Kron, a Fermilab and University of Chicago scientist, said in a statement. “That is extremely encouraging. The Dark Energy Survey is educating a new generation of cosmologists.”

The night sky was photographed by survey scientists using the 570-megapixel Dark Energy Camera on the Victor M. Blanco 4-Meter Telescope at the Cerro Tololo Inter-American Observatory in Chile, as part of the National Science Foundation’s NOIRLab program. The Dark Energy Camera, one of the most powerful digital cameras in the world, was designed specifically for the Dark Energy Survey and built and tested at the Fermilab particle physics and accelerator laboratory in Illinois. The data were processed at the University of Illinois at Urbana-National Champaign’s Center for Supercomputing Applications.