You are here: Home Biology labelled diagram of Sporophyte of Moss

The sporophyte is the diploid phase of the alternation of generations, a method which allows sexual and asexual reproduction to prevent destructive genes to be reproduced. Moss is a non-vascular plant, meaning that it has no internal system to transport water.

Sporophyte of Semibarbula or Moss: Zygote is the first cell of the sporophyte. The zygote (2n) divides, develops and eventually produces a sporophyte, called sporogonium. This sporogonium has three parts. 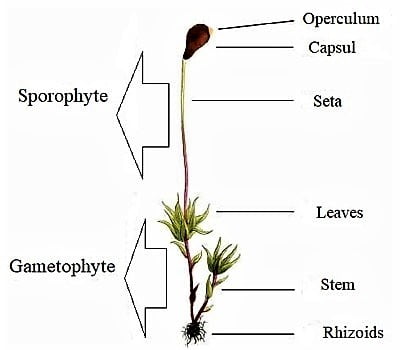 Foot: The lower part of seta which keeps the sporophyte attached with gametophyte is called a foot. It functions as an anchoring and absorbing organ.

Function: Sporophyte absorbs food and water from garnetophore through the foot.

Function: Conducts food for the capsule. It is mechanical in function and also conducts the water and nutrients to the developing capsule.

Capsule: It is the terminal part of the sporophyte and is developed at the apex of the seta. It is green in color when young but on development, it becomes bright orange colored.

The following parts are found in the longitudinal section of the moss capsule.

The basic function of the sporophyte is to produce spores. The spores, in turn, produce the gametophytes that give rise to the male and female gametes through the procedure of meiosis. Meiosis is the type of cell division that reduces the number of chromosomes in half.

Without the sporophyte, the life cycle of plants will be disrupted and plants will not be capable to reproduce. Without it, fruits won’t develop and plants will simply rely on asexual methods of propagation. This weakens the hereditary pool of plant species.