You are here: Home Biology Epiblema Function and Formation in Plants

(ii) Unicellular root hairs are present in the epiblema.

Epiblema is the single outermost layer of the root. It is mostly colorless, shadeless, polygonal without any intercellular spaces and related issue, with the presence and occurrences of unicellular root hairs of plants, hence also called a piliferous layer or rhizodermis. It is made of efficiently arranged thin-walled compacted and slightly elongated parenchymatous cells. The cells are typically thin-walled since they are involved in the absorption of water. It is a part of the root which helps to stop water absorbed to flow out and to absorb liquids. 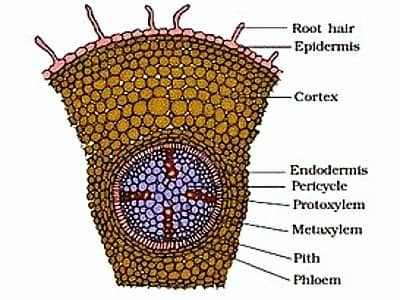 Some cells of the epiblema give rise to thin-walled tubular outgrowths called root hairs. They are called trichoblasts. Generally, cuticle and stomata are absent in most plants. It imperfectly produced epidermis which supplies the region of the true epidermis in submerged plants and on the extremities of growing roots of plants. A few of the epiblema cells are formed and produced into long unicellular projections called root hairs.