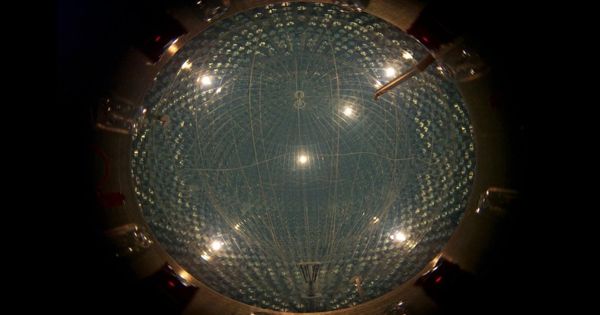 Neutrinos formed by the mysterious carbon-nitrogen-oxygen (CNO) cycle in the Sun have been detected for the first time – supporting the hypothesis that was first proposed over 80 years ago. The discovery was made by physicists working on the Italian Borexino detector and gives an important glimpse into how stars themselves are powered by turning hydrogen into helium. New science records the Borexino experiment’s first attempt to quantify low-energy neutrinos from the Sun’s carbon-nitrogen-oxygen (CNO) cycle. Borexino is a low-background liquid scintillation detector that is currently collecting solar and terrestrial neutrino data at the Gran Sasso underground laboratory in Italy.

Neutrinos that are emitted along such fusion processes in the solar core are the only direct probe of the deep interior of the Sun. Neutrinos are charged particles of around a millionth of the mass of an electron produced by nuclear reactions that exist in the Sun and other stars. These particles are also colorfully represented as the ‘ghosts’ of the particle zoo because they interact very weakly with matter. A paper published in EPJ C by the Borexino collaboration—including XueFeng Ding, Postdoc Associate of Physics at Princeton University, United States—documents the attempts of the Borexino experiment to measure low-energy neutrinos from the Sun’s carbon-nitrogen-oxygen (CNO) cycle for the first time. 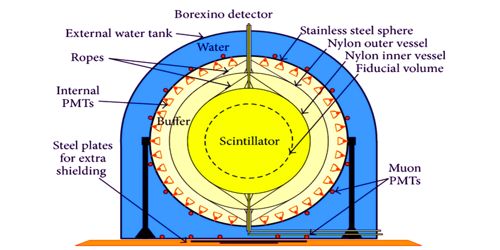 Astrophysicists conclude that stars transform hydrogen to helium by two nuclear fusion mechanisms. One is called the pp chain, responsible for 99 percent of the Sun’s fusion energy. It requires a pair of protons fusing to generate deuterium, which then fuses with a third proton to produce helium-3. Finally, two helium-3 nuclei combine to produce the helium-4. There are two other divisions of the pp chain that also contain helium-4 by the intermediate processing of lithium, beryllium, and boron.

“This giant instrument, buried beneath the Gran Sasso mountains in the Gran Sasso National Laboratory in Italy, is capturing ghost-like neutrinos from a so-called CNO process in the very center of the Sun,” Ding explains. “We made tens of thousands of simulations and predicted that we would be able to prove these ‘CNO’ ghosts exist for the first time in human history ever.”

Physicists operating on the detector have now measured a much smaller neutrino signal from the CNO cycle. In order to do so, physicists had to solve the identification problems presented by the comparatively low energy and flow of CNO neutrinos.

The Sun produces energy by converting four hydrogen nucleus to one helium nucleus through two mechanisms. The majority of the energy produced by the Sun is triggered by the direct fusion of two protons into a deuteron, starting with the pp chain, while the other mechanism is catalyzed by the heavier nucleus, such as carbon, nitrogen, and oxygen, known as the CNO cycle—which produces about 1% of the energy output of our stars. As well as this limited energy contribution, about 1% of the neutrinos that flow from the Sun should also be provided by the CNO cycle.

“Neutrinos from the CNO cycle process in the Sun had remained essentially hypothetical until the recent report of Borexino on the Neutrino 2020 conference,” Ding says. Although the Sun itself has only a 1% CNO branch, and since neutrinos are still extremely difficult to track, the CNO mechanism itself has yet not been determined, even though the main energy processing avenue in the stars is known to be much more massive than the Sun. Detecting neutrinos from the CNO cycle will tell researchers a lot more about it, exposing mysteries hidden under the crust of the most massive stars in the Universe.