You are here: Home Chemistry Explain Limitation of Rutherford Model

The Rutherford model for the structure of atoms has several limitations which are given below:

(i) This model was made analogous to the solar system where the nucleus may be compared to the sum and the electron to the planets. In space, the planets are neutral and attract each other according to the law of gravitation. However, the electrons orbiting the nucleus are negatively charged and these electrons repel each other. 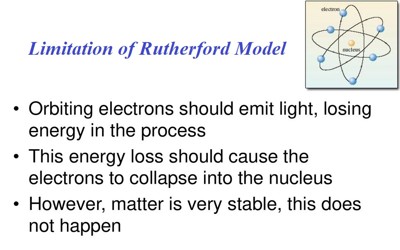 (ii) Rutherford’s model was unable to explain the stability of an atom. It was shown by Clark Maxwell that a charged body moving under the influence of attractive force loses energy continuously in the form of electromagnetic radiation. The electromagnetic radiation will have force from the electronic motion as a consequence of which the orbits will steadily get smaller. Thus unlike a planet, the electron is a charged body and it emits radiations while removing around a nucleus. Finally, the orbits will shrink and collapse in the nucleus of an atom. As a result, the electron should lose energy at every turn and move closer and closer to the nucleus following a spiral path. Consequently, the orbit will become smaller and smaller and finally, the electron will into the nucleus, In other words, the atom should collapse. According to the calculations, if Maxwell’s clarification is followed Rutherford’s model will fall down with 10-8 seconds. However this never happens, therefore except some drawbacks in the atomic model of energy, as a result, it falls to the nucleus. Therefore, the Rutherford atomic model was not following Maxwell’s theory and it was unable to clarify an atom’s constancy. (iii) Rutherford model also failed to explain the existence of certain definite lines in the hydrogen spectrum. This model failed to sufficiently explain the atomic emission spectra of hydrogen. Why did Hydrogen absorb a few accurate wavelengths of light and not others?

(iv) This model does not give any idea of the shape and size of the orbits of electrons. It didn’t explain the arrangements of electrons in various shells. An atom contains a nucleus in it and also electrons revolving. So both should attract each other. But Rutherford explained that the electrostatic desirability is balanced by centrifugal force allowing an electron to revolve. Rutherford proposed that the electrons revolve around the nucleus in fixed paths called orbits.

Rutherford’s theory was unfinished because it did not reveal anything about the arrangement of electrons in the orbit. This was one of the key drawbacks of the Rutherford atomic model.