Home Biology Circulation of Blood through the Toad’s Heart

If you look at a diagram of a toad’s circulatory system, you will notice the heart is different than ours. It has two atria and a single ventricle, making it have a total of three chambers. Like all other land animals, the toad has double circuit circulatory system. Blood is circulated through successive contraction and relaxation of heart. 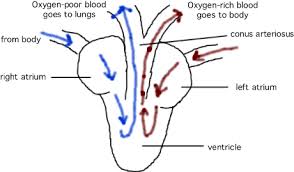 Later, the wall of the ventricle contracts and through the control of the semilunar valve, blood from the ventricle enters the cavity of the cons arteriosus. Afterwards oxygenated and carbon-dioxide enriched mixed blood through the right and left aorta circulates respectively through the carotid, systemic and pulmocutaneous arteries.