Raman Spectrum: The Raman effect can be easily understood, by considering the scattering of the photon of the incident light with the atoms or molecules.

Let the incident light consist of photons of energy hν0.

The Raman shift does not depend upon the frequency of the incident light but it is the characteristic of the substance producing Raman effect. For Stoke’s lines, Δν is positive and for Anti–stoke’s lines Δν is negative. The intensity of Stoke’s line is always greater than the corresponding Anti−stoke’s Line. The different processes giving rise to Rayleigh, Stoke’s and Anti-stokes lines are shown in Figure. 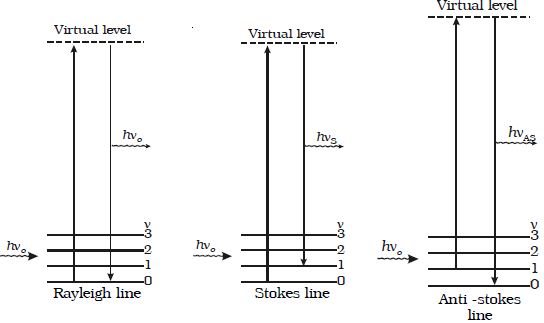 When a system interacts with a radiation of frequency νo, it may make an upward transition to a virtual state. A virtual state is not one of the stationary states of the molecule. Most of the molecules of the system return back to the original state from the virtual state which corresponds to Rayleigh scattering. A small fraction may return to states of higher and lower energy giving rise to Stoke’s line and Antistoke’s line respectively