If the result is positive, then the assumed direction is the same as actual direction.

Let consider the electric circuit given in Figure 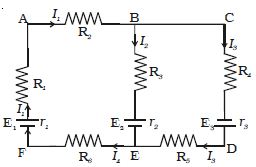 Both cells E1 and E3 send currents in clockwise direction.

For the closed loop ABEFA

Negative sign in E2 indicates that it sends current in the anticlockwise direction.