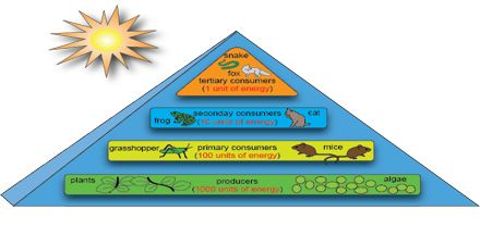 Ecosystem: The dynamic system of mutual interaction between biotic (plants, animals and bacteria etc.) and their abiotic (soil, water, light etc) environment is said to be the ecosystem

Energy flow: The one-way flow of energy through the ecosystem is known as energy now The steps of energy flow in the ecosystem are as follows:

Producers: Green plants store solar energy as chemical energy after it is converted by photosynthesis. Therefore green plants are the producers. Most producers are plants, but there are some small organisms that produce food through photosynthesis as well. Producers are at the beginning of any simple food chain.

Decomposers: Some bacteria and molds break down the dead bodies of plants and animals step by step and turn them into simpler substances of dead plants and animals. Thus they are also called organic and inorganic substances in the ecosystem. Decomposer (such as, bacteria, molds etc) break down the dead bodies to form organic and inorganic substances that can be reassembled by the producers. Decomposers are the garbage men of the animal kingdom; they take all the dead animals and plants (consumers and decomposers) and break them down into their nutrient components so that plants can use them to make more food.

Define and Describe on Ecosystem