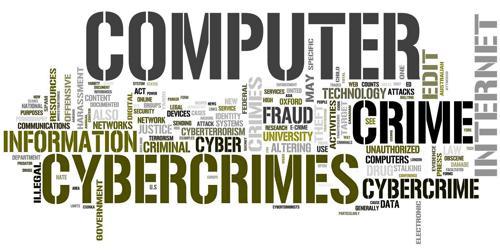 Computer crime: Criminal actions accomplished through the use of a computer system, especially with intent to defraud, destroy or make unauthorized use of computer system resources.

Computer or cybercrime may contain broader terms like hacking, copying of copyrighted substance, child grooming, stealing and mishandling of Confidential/private information of someone else, making a computer virus or a bug or a malware with a purpose to plot at someone’s computer or a network in order to gain a advantage or to take retribution or another cause which make you do such an act is a computer crime.

Different types of computer crime. There are three major classes of criminal activity with computers:

(1) Unauthorized use of a computer: Which might involve stealing a username and password, or might involve accessing the victim’s computer via the Internet through a backdoor operated by a Trojan Horse program. Creating or releasing a malicious computer program (e.g.; computer virus, worm, Trojan Horse). Harassment and stalking in cyberspace.

Similarly, many crimes involving computers are no different from crimes without computers: a computer is only a tool that a criminal uses to commit a crime. For example,

(i) Using a computer, a scanner, graphics software, and a high-quality color laser or ink jet printer for forgery or counterfeiting is the same crime as using an old-fashioned printing press with ink. Stealing a laptop computer with proprietary information stored on the hard disk inside the computer is the same crime as stealing a briefcase that contains papers with proprietary information.

(ii) Using the Internet or online services to solicit sex is similar to other forms of solicitation of sex, and so is not a new crime.

(iii) Using computers can be another way to commit either larceny or fraud. In contrast to merely using computer equipment as a tool to commit old crimes, this essay is concerned with computer crimes that are new ways to harm people.

(3) False origin: There are many instances of messages sent in the name of someone who neither wrote the content nor authorized the sending of the message. For example:

(i) E-mails with bogus from addresses were sent automatically by malicious programs (e.g., the Melissa virus in 1999, the Bad Trans worm in 2001, the Klez program in 2002).

(ii)Posting messages in an Internet newsgroup or online bulletin board with a. false author’s name that is intended to harm the reputation of the real person of that name.

(iii)These acts might be punishable by existing criminal statutes that prohibit impersonation, forgery, deceit, or fraud. However, a judge might decide that the specific language in old statutes about writing or signature does not apply to e-mail. Rather than write new statutes for forged e-mail addresses or unauthorized sending of e-mail in someone else’s name, I would prefer that legislatures broaden the existing criminal statutes for analogous crimes with paper and ink.

Essentials and Prerequisites of a Valid Notice