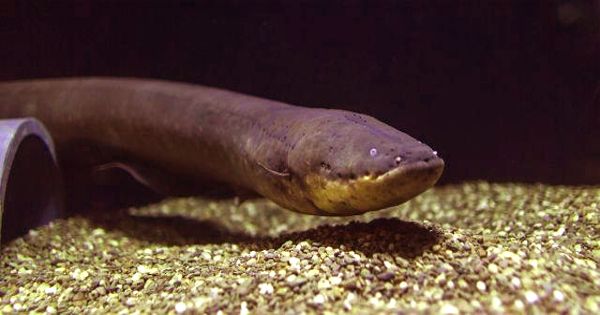 More than 100 electric eels were found in one location deep in the Brazilian Amazon River basin, which shocked scientists, considering that these animals were thought to be very solitary. Deep in the Brazilian Amazon River delta, scientists led by the Smithsonian National Museum of Natural History of Fish Research Partner C. David de Santana discovered a remote, river-fed lake filled with more than 100 adult electric eels, many of which were more than 4 feet long. This was an intriguing finding of its own, electric eels-a a form of knife fish rather than true eels-were considered to be solitary species.

But in this lake along the banks of the Iriri River in the state of Pará, Brazil, the researchers observed angels working together to herd small fish called tetras in closely packed balls. Then groups of up to 10 eels occasionally break up to form cooperative hunting parties, not unlike packs of wolves or pods of killer whales. The smaller groups then surrounded the prey ball and launched simultaneous electrical attacks, shocking the tetras in submission.

Scientists have for the first time observed electric eels gathering by the dozens and coordinating group hunts in the Amazon.

“This is an extraordinary discovery,” de Santana said. “Nothing like this has ever been documented in electric eels.”

De Santana is the senior author of a recent paper explaining this novel behavior in the January 14 issue of Ecology and Evolution. The results overturn the notion that these serpentine fish are strictly solitary predators and open the door to new concerns as to how these little-understood fish live.

“Hunting in groups is pretty common among mammals, but it’s actually quite rare in fishes,” de Santana said. “There are only nine other species of fishes known to do this, which makes this finding really special.”

One of the latest species of electric eel presented in its 2019 article, Volta’s electric eel (Electrophorus voltage), is capable of generating 860 volts of electrical shocks-the highest electrical discharge of any animal on Earth and 210 volts higher than the previous record. The recently identified electric eel of Volta, which can reach a length of 8 feet, is also the species behind the social hunting technique at the heart of Santana’s latest study. “If you think about it, an individual of this species can produce a discharge of up to 860 volts – so in theory, if 10 of them discharged at the same time, they could be producing up to 8,600 volts of electricity,” de Santana said. “That’s around the same voltage needed to power 100 light bulbs.” 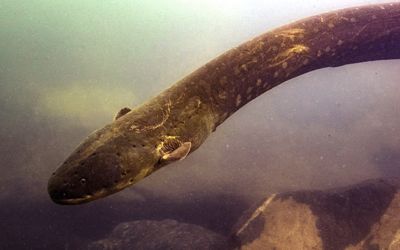 Direct observations of these synchronized shocks are one of the aspects that Santana and his colleagues are planning to obtain during their next trip to the remote waters of the Amazon Basin. Luckily, for de Santana, who has been shocked more than once by the individual eels in the area, the shock lasts just about two-thousandths of a second, but it’s enough to cause a debilitating muscle spasm that might cause a human to fall off their feet.

De Santana’s team was the first to observe Volta’s electric eel hunting in groups during a field expedition in August 2012. Douglas Bastos, then a Master of Science candidate at the Instituto Nacional de Pesquisas da Amazônia (INPA) in Brazil, and the first author of the study, traveled five days by boat to discover the variety of fish in the Iriri River. Bastos, now a scientist at INPA, found a small lake immediately connected to the Iriri River and, to his astonishment, the lake had more than 100 adult electric eels.

A subsequent expedition in October 2014 found a similarly prodigious array of Volta’s electric eels in the same area, allowing Bastos to record the behavior in more detail and conclude that it was not just a one-off case. In all, the team logged 72 hours of continuous monitoring of the eels congregating along the Iriri River at this spot.

For much of the day and night, the eels lay nearly immobile at the lower end of the lake, only sometimes rising to the surface to breathe—electric eels get the vast majority of their oxygen from the air, and adaptation in response to the low-oxygen waters they often inhabit. But the congregation started to stir at dusk and dawn.

In these twilight hours, the anguish began engaging with each other and then began to float in a wide circle. This ring of electric eels corralled thousands of 1-to-2-inch tetras into closer and tighter shoals. The researchers observed the party herd clustered tetras from the deepest end of the lake—about 12 feet down—to shallow, 3-foot deep waters.

With the tetras caught by the main party, de Santana says that two to ten angel bands will split, move closer and then perform joint electric attacks on the prey ball. The electric shocks sent the tetras soaring out of the water, but the little fish were shocked and motionless as they splashed down. Finally, the charging eels and their compatriots quickly took down their defenseless prey. According to de Santana, every dawn or dusk hunting ritual lasted about one hour and contained between five and seven high-voltage attacks.

“This is the only location where this behavior has been observed, but right now we think the eels probably show up every year,” de Santana said. “Our initial hypothesis is that this is a relatively rare event that occurs only in places with lots of prey and enough shelter for large numbers of adult eels.”

In De Santana’s opinion, team interviews with locals would have given rise to reports of whirling pools packed with electric eels, if these gatherings were popular. “These animals can be 8 feet long and produce 860-volt electric shocks; if 100 of them being in one place was a common occurrence, I think we would have heard about it before now.”

But when the circumstances are correct, this hunting strategy helps the eels to subdue vast numbers of food that are typically too evasive to catch. Electric eels normally feed on their own at night by sneaking on sleeping fish and jolting them into an easy-to-eat torpor.

De Santana and his team hope that their recently introduced citizen science initiative called Projeto Poraquê will help to find more of these special aggregations of eels. The project, named after the Indigenous Brazilian word for electric eel, will allow users to record sightings and log observations.

Currently, de Santana and his colleagues are in the early stages of planning the next expedition to this unusual position along the Iriri River. They plan to gather additional tissue samples and identify individual eels with radio tags in order to clarify the potential relationship and structure within the population. De Santana would also attempt to take direct measurements of electrical discharges generated during community hunting in order to calculate their maximal voltage and to evaluate if the eels may also use low voltage shocks to interact and orchestrate their efforts, similar to how other marine mammals, such as whales and dolphins, use sound to organize the hunting of their prey.

With the Amazon under pressure from deforestation, fire, and climate change, de Santana said there is a deep sense of urgency in accelerating the evaluation of biodiversity in the region. The team suspects that the behavior is not normal and is likely to happen only when the circumstances are correct. “Our initial hypothesis is that this behavior really occurs in locations with high prey abundance and also with long-term shelter for multiple eels,” de Santana said. That means a lot of fish and a lot of nooks and crannies for the eels to hide in. These requirements can only occur in the center of the Amazon, he said.