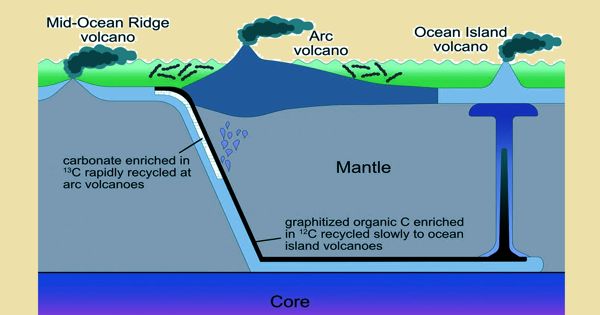 Carbon is a key control of the surface chemistry and climate of Earth. Carbon plays a fundamental role on Earth. It forms the chemical backbone for all essential organic molecules produced by living organisms. Carbon compounds regulate the Earth’s temperature, make up the food that sustains us and provide energy that fuels our global economy. The research by a team including Case Western Reserve University scientists focused on the “deep carbon cycle,” part of the overall cycle by which carbon moves through the Earth’s various systems. The interdisciplinary field of deep carbon science integrates the knowledge of chemists, physicists, geologists, and biologists who study carbon in Earth’s deep interior.

The carbon cycle between the deep Earth and the atmosphere can significantly affect the global climate on both long and short time scales. Atmospheric carbon dioxide affects Earth’s climate. Scientists have long suspected that partially melted chunks of this carbon are broadly distributed throughout the Earth’s solid mantle. Yet despite its importance, remarkably little is known about the physical, chemical, and biological behavior of carbon in the vast majority of Earth’s interior.

DCO scientists explore the quantities of carbon in Earth by studying the planet’s principal deep carbon reservoirs as well as the total amount of carbon it contains. “Cycling of carbon between the surface and deep interior is critical to maintaining Earth’s climate in the habitable zone over the long term — meaning hundreds of millions of years,” said James Van Orman, a professor of geochemistry and mineral physics in the College of Arts and Sciences at Case Western Reserve and an author on the study, recently published in the Proceedings of the National Academy of Sciences. Some deep carbon scientists look for places where significant carbon can be stored, from mineralogical to regional scales. Most of Earth’s carbon is stored in rocks and sediments. The rest is located in the ocean, atmosphere, and in living organisms. 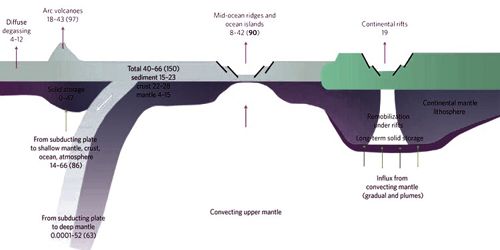 Deep carbon science is also concerned with the mechanisms and rates by which carbon moves between Earth’s carbon reservoirs. Van Orman said this new research showed — based on experimental measurements of the acoustic properties of carbonate melts, and comparison of these results to seismological data — that a small fraction (less than one-tenth of 1%) of carbonate melt is likely to be present throughout the mantle at depths of about 180-330 km. The deep carbon cycle of the Earth connects the exospheric (atmosphere, hydrosphere, biosphere) reservoirs of carbon to those in the crust and mantle

Carbon is the chemical backbone of life on Earth. That’s important, Van Orman said, because gradual changes in the amount of carbon stored in this large reservoir, due to exchange with the atmosphere, could have a corresponding effect on CO2 in the atmosphere — and therefore, on long-term climate change. By monitoring the fluxes of carbon dioxide released during volcanic activity, as well as during passive volcanic degassing at nominally ‘inactive’ volcanic vents, deep carbon scientists learn about the movements of carbon out of Earth’s deep interior.

The research also sheds light on seismology, especially deep earth research. Deep carbon science is improving our understanding of the physical and chemical behavior of carbon at the extremely high temperatures and pressures found in the interior of Earth and other planets.

The deep carbon cycle considers Earth’s largest carbon reservoirs in the core and mantle. One way geologists better understand the deep interior is by measuring how seismic waves generated by earthquakes — fast-moving compressional waves and slower shear waves — move through the Earth’s layers. Deep carbon scientists explore the origins and evolution of our planet and are providing new information about the redistribution of Earth’s initial, planetary-scale carbon budget.

Scientists have long wondered why the speed difference between the two types of seismic waves — P-waves and S-waves — peaked at depths of around 180 to 330 kilometers into the Earth. The key difference between the surface and deep carbon cycles is timing, with the latter operating on time scale orders of magnitude slower than the former.