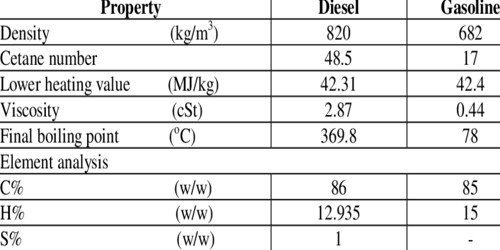 The conductivity of fuel is calculated for the ability of a fuel to dissipate the static electric charge. Diesel fuel is a hydrocarbon. Diesel fuel is a combination of hydrocarbons obtained by the distillation of crude oil. It is a non-conductor. That probe depends on the fact that water is heavier than diesel, so the diesel floats.

A value of the electrical conductivity of about 50 pS is required for a diesel fuel not to create a static discharge when in rapid movement and straight-run diesel might well have value this high or higher. Ultra-low sulphur diesel (ULSD) has become the norm in many countries since about 2006, and the processes involved in removing the sulphur tends to lower the conductivity. Very interesting comparisons are made in reference, in which a particular ‘pre-2006’ diesel is compared with a ULSD in terms of electrical conductivity.

The values are respectively 226 and 10 pS m-1 and the latter is clearly unacceptable.

It is shown in how the use of a particular additive can raise the conductivity of ULSD to several hundreds of pS m-1‘, ensuring the safety of the product from the electrostatic discharge point of view.

As for flammability, diesel flash point is above 300°F or so. There is an enormous difference between gasoline and diesel in terms of danger from the combustion of fumes. Conductivity is significant because in a low conductivity fuel electrical charges can gather and finally lead to dissipation in the form of a spark. Low conductivity fuels have been liable for a number of petroleum products terminal fires in recent years. As a result, the least conductivity specifications have been established for definite petroleum product handling operations.

The standard substance and that being examined will be tested in the same apparatus without adjustment of conditions between the tests. This approach was taken in the work described in reference to which the wear scars were measured in more than one direction and averaged. Such values for the ‘high lube standard’ and low lube standard’ at a test temperature of 25°C were 320 and 654 pm respectively. A regular diesel having had no desulphurization gave a value of 413, whilst a ULSD without an additive gave 613 μm. The same ULSD with a lubricity additive gave 303 μm.

Define and Describe on Optical Isomerism