(ii) the new wavefront is the forward envelope of the secondary wavelets at that instant.

Huygen’s construction for a spherical and plane wavefront is shown in Fig: a.

Let AB represent a given wavefront at a time t = 0. According to Huygen’s principle, every point on AB acts as a source of secondary wavelets which travel with the speed of light c. To find the position of the wave front after a time t, circles are drawn with points P, Q, R … etc as centres on AB and radii equal to ct. These are the traces of secondary wavelets. The arc A1 B1 drawn as a forward envelope of the small circles is the new wavefront at that instant. If the source of light is at a large distance, we obtain a plane wave front A1 B1 as shown in Fig: b. 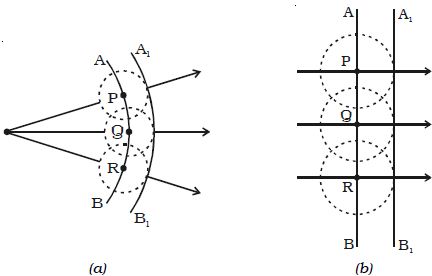 What is Choke Coil?

Application of Gauss’s Law: Field due to an Infinite Long Straight Charged Wire