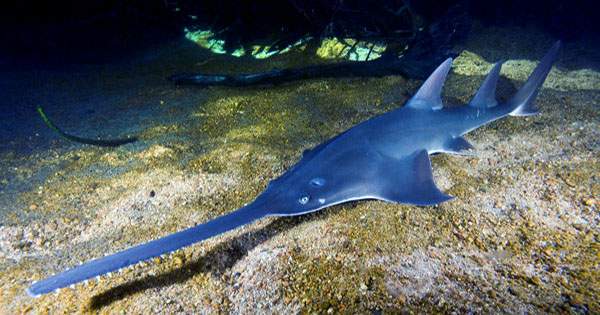 Photographer and marine researcher Jake Davies took a film of the elusive angel shark (Squatina squatina) off the coast of Wales recently, in a world-first for the UK coastline. The angel shark, which is listed as Critically Endangered on the IUCN Red List of Threatened Species, has been declining for the past 50 years, but the recent sighting of a juvenile in a new site may help to guide conservation efforts to ensure their survival. The angel shark is a cartilaginous fish that belongs to the Chondrichthyes family, which includes sharks and rays. It has an unusual body layout.

It has wings fins and a flat body, similar to a ray, and can submerge itself in the sand for ambush predation. It possesses remarkable jaws, similar to some shark species, that it can project outwardly at high speeds to catch passing fish before they even realize they’re in danger. In Davies’ video, the angel shark can be seen capturing a goby from its hiding position, demonstrating this excellent hunting tactic. Angelsharks’ skin coloring and patterns make it easier for them to blend in on the seabed, as the video’s star demonstrates.

In a press release, Davies said, “It was wonderful to see and record it swimming, burrowing into the sand, and then using its camouflage to ambush prey.” “We never imagined we’d be able to shoot footage like this in Wales.” Davies’ fortuitous meeting revealed fascinating details on angel shark birthing habits, like the shark in issue was a juvenile measuring only 30 centimeters (12 inches) in length. The fact that this young angel shark was hunting in North Cardigan Bay indicates that the species is actively breeding in UK waters, with Welsh waters being used as a nursery.

“Having worked to better understand the species for the last four years, I’ve always kept an eye out for Angelsharks on dives,” Davies stated. “I couldn’t believe my eyes when I saw the Angelshark, and what was even more amazing was that it was a youngster, measuring only 30 centimeters [12 inches] in length, indicating that the species is reproducing in this area.”

Angel sharks have been helped by the Angel Shark Project: Wales (ASP: W), a collaboration between Natural Resources Wales (NRW) and the Zoological Society of London, due to their rarity (ZSL).

Its goal is to get people and fishermen together with scientists so that incidental observations like this one can help us learn more about angel sharks and their habits.

“Little is known about the status, ecology, or location of significant Angelshark habitats in Wales,” stated Ben Wray, NRW’s Marine Ecologist and Project Manager. “Juvenile Angelshark records account for only 4% of all Angelshark records collected by ASP: W to date, therefore this footage is crucial. It adds to our knowledge of Angelshark ecology, such as the fact that they utilize both sand and mixed habitats and that juveniles eat gobies. We’ll utilize this data to guide future study and learn more about this endangered species in Wales.”