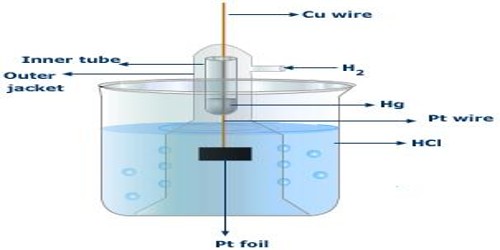 Gas electrode is an electrode consisting of a conductor covered with a gas. An electrode capable of dissolving a gas or holding it on its surface; it is usually made of finely divided metal and in the solution behaves as a reversible electrode. These electrodes are prepared by dipping a foil of an inert metal like platinum or gold in a solution and bubbling the gas over the surface of the foil. An example is the hydrogen electrode represented as-

It consists of a platinized (platinum foil on which platinum has been deposited electrolytically) platinum foil dipped into a solution containing hydrogen ions and a stream of hydrogen gas at a pressure P atm is bubbled through the solution on the surface of platinum. The arrangement is shown in Figure. Usually the vessel is open to the atmosphere so that the gas is at atmospheric pressure. The reaction at the hydrogen gas electrode may be written as- 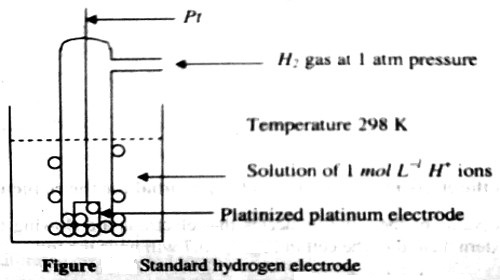