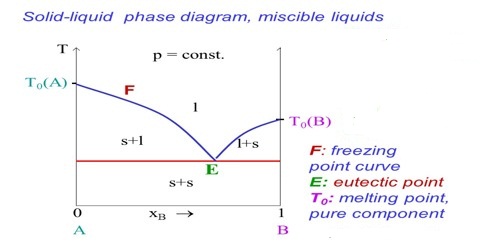 There are pairs of liquids which are insoluble in each other. When mixed in any proportion they separate into two layers. Such liquids are said to be immiscible with each other. Examples are: carbon tetrachloride/water, mercury/water, nitrobenzene/water, aniline/water. 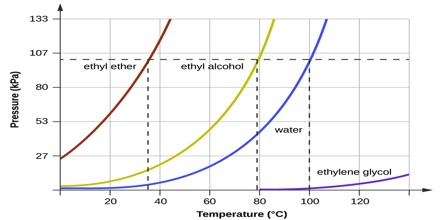 Fig: Vapour pressures of water and octane and their mixture at different temperatures

As can be seen the mixture boils at a lower temperature than any of the pure liquids. This property of such mixtures has two used to separate/purify many organic liquids which are immiscible with water. The method is known as steam distillation.

A diagram of an apparatus used for steam distillation is shown in Figure 2. It consists of a round-bottomed flask F, having a glass inlet tube which reaches almost to the bottom of the flask and is connected to a steam generator G. The flask has also a glass outlet tube connected to a Liebig condenser. 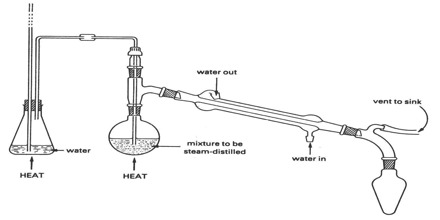 The material to be steam-distilled is placed in F and a vigorous current of steam blown in from G. The mixture is thus rapidly heated and the vapour of the organic compound mixed with steam passes over and condensed in E. The organic compound can be separated from water with the help of a separating funnel and dried by suitable means.