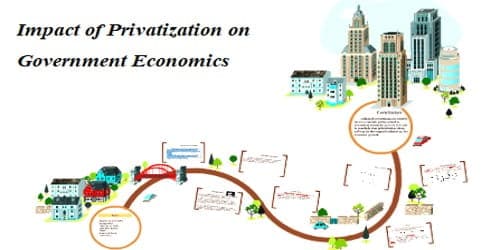 Impact of Privatization on Government Economics

The effect of privatization on government economics is largely positive. The effect on government revenue is more complex than it might appear. This can very well be judged by the speed at which the government is privatizing various industries that were once governed by the public sector. The only way to bring the loss-making public sector units into profit was to privatize them in a phased manner. Many industries under the public sector had been suffering major losses owing to poor management, and lack of proper resources. It affected government economics adversely. The privately managed enterprises, it is expected, will show better results because of high managerial skills.

Here is how privatization has impacted society:

Lowered Government Burden – The government has an inadequate fund assigned for every sector and many of the sectors were facing financial issues. The government had to take debt to accomplish these and had come under huge debt.

Improved Service – The quality of services provided to the consumers improved as a result of the shift to the private sector. The private owners provide good sales as well as after-sales service to the customers.

The decision of privatizing various sectors has come as a relief to the government. This has reduced the wastage of government resources and wealth. Privatization has led to power in the hands of more learned and skilled professionals. Moreover, it also stopped any political interference plus brought competitive rates. Until an industry is under the public sector it is governed by the government and there is a lot of interference from the political parties.

A lot of politics and corruption go about in such cases. A number of scams related to various sectors that have been revealed in the past are an example of the high level of corruption that takes place in the public sector. In private sector personal interest is the driving force in small installations as well as huge concerns.

This corruption involving the misuse of the government’s wealth has subsided with the initiation of privatization. Hence, privatization has had a positive impact on government economics.