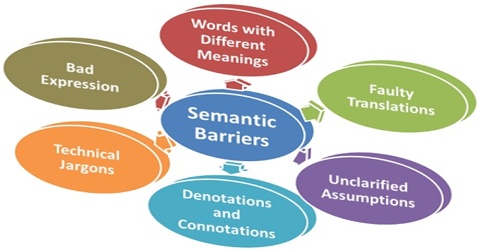 A common communication barrier to effective communication is semantic distortion, which can be deliberate or accidental. Semantic problem arises when words and symbols have different meanings for different people that lead to a misunderstanding.

For example, an advertisement states, “we sell for less.” It is ambiguous and raises the question: less than what? In another case, during meeting, a male colleague said to one of his female colleague. “Why don’t you dye it?” meaning her hair. The female colleague thought he said. “Why don’t you diet?” She did not speak to him for a month. Another example, a person who uses the word “bimonthly” might mean twice per month while the person hearing it thinks it means every other month. The message is not formulated properly and the language used is so difficult that it could be misinterpreted by the recipient.

Semantic barrier presents difficult challenge when people from different cultures communicate with each other. Thus, semantic barriers lead to misunderstanding of the information and the objective of communication, i.e. for which it was intended, gets disrupted.