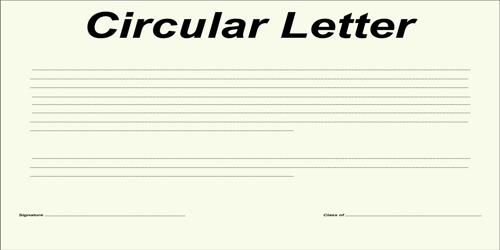 Circular letter is one of the oldest types letter. This kind of letter originated in ancient time when people felt the necessity of circulating any message to a large number of people at a time in the same way.

Generally, the letter that is used to circulate any special message to a huge member of audiences at the same time is known as circular letter. It is one of the cost effective means of circulating information or introducing new products to mass people. However, circular letters are not only used in business, but also in social, political, and personal affairs.

Prof. W. J. Weston said, “A circular letter is one which is meant to be read by a number of correspondents. It is of the nature of an advertisement and is usually a business announcement or an attempt to advance business.”

From the above discussion we can say that circular letter is a kind of written announcement that is distributed to a law number of people to convey any commercial or non-commercial message at minimum time, costs and efforts. Drafting circular letter is purely an art. It should be drafted in such a way that can attract readers’ attention and can serve its purpose.

Major challenges to the development of Global System