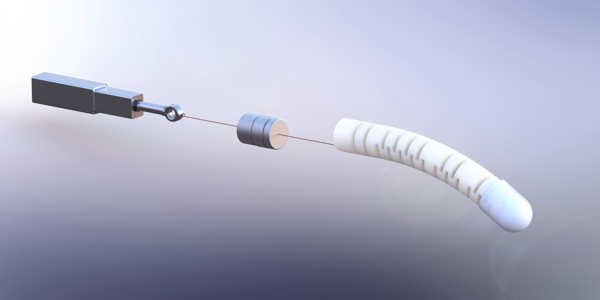 Despite their texture-related advantages, soft-material robotic hands are frequently incapable of collecting a wide range of sensory information. In fact, so far, replicating the complex biological mechanisms that allow humans to gather tactile information about objects has proven extremely difficult.

Researchers at Beijing’s Beihang University have recently developed a new tactile sensing technology that could be applied to soft-material robotic fingers. This mechanism is inspired by proprioception, the biological mechanism that allows mammals to perceive or be aware of their body’s position and movements, as described in a paper pre-published on arXiv.

“Our recent paper is based on the proprioception framework found in humans, which is what determines our body position and load on our tendons/joints,” Chang Cheng, one of the study’s authors, told TechXplore. “Consider how, even when wearing a blindfold and covering your ears, you can still feel your hand posture, arm position, or the weight of a grocery bag; this ability is known as proprioception. We’ve been working on a research project for prosthetic hands, and we’re looking for ways to address the lack of sensory feedback in existing prosthetic hands.”

Researchers have been trying to create increasingly realistic and advanced bionic limbs and humanoid robots, using soft materials instead of rigid structures.

Previously, robotics researchers did not usually associate proprioception with the sense of touch. In fact, the human proprioception mechanism does not allow for particularly precise responses, which is most likely why humans do not use it to recognize the texture of objects or surfaces.

However, because industrial sensors are far more sensitive than human proprioceptors, using them on robotic fingers could allow researchers to collect more precise tactile sensory feedback. Cheng and his colleagues’ prototype system consists of a linear actuator, a tendon (or cable), a strain sensor, and a soft robotic finger introduced in one of their previous papers.

Essentially, the researchers’ technique extracts features from sensor readings. Following that, it employs machine learning techniques to determine the texture and rigidity of the surface or object that the robotic finger is touching.

Cheng and his colleagues put their tactile sensing technology to the test by running a series of tests on the prototype system they built. They discovered that their technique could accurately decipher texture and stiffness (100 percent and 99.7 percent, respectively).

“The majority of existing research on innervating bionic fingers proposed installing sensors on the fingertip surface,” Cheng explained. “While these studies have produced promising results, they necessitate precise contact between the fingertip sensors and the objects, which is often not possible in practice. Because the sensing unit is located on the tendon, contact from anywhere on the finger will result in a characterized signal output, which can be used to infer tactile information.”

This team of researchers’ new tactile sensing method is based on the embedding of sensors on a robotic tendon, an approach that had never been tested before and that they found to be highly promising. The system they created could be used to create more advanced robots and prosthetic hands that can gather tactile and proprioceptive feedback without requiring perfect or exact contact with a surface in the future.

“We are now investigating this system’s slippage detection capabilities,” Cheng said. “Slippage is almost unavoidable when we manipulate or grasp things, so detecting and controlling slippage is critical to robust and reliable controls. As a result, we believe slippage detection would be a useful feature to include, and our preliminary experiments yielded very promising results.”

In addition to further developing their system, the researchers are working with a renowned nanotechnology lab to create a low-cost tactile sensor that can detect force/torque signals and could be placed on robotic fingertips. They already created a few prototypes of this device and are now evaluating its performance.