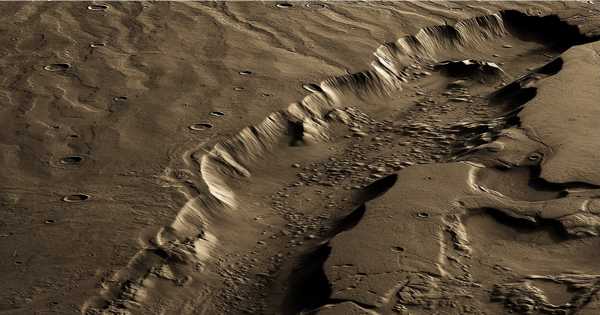 Because of its proximity and similarities to Earth, the possibility of life on Mars has piqued the interest of astrobiologists. To date, no evidence of past or present life on Mars has been discovered. The accumulation of evidence suggests that the surface environment of Mars had liquid water during the ancient Noachian time period and may have been habitable for microorganisms, but habitable conditions do not always indicate life.

Mars might be harboring an ecosystem of microbial life underneath its surface that survives on radioactivity-fueled chemical activity, an international team of scientists led by NASA says.

According to new research published in the journal Astrobiology, the environment just beneath the surface of Mars may mirror the conditions that support underground microbes on Earth, despite the fact that the surface of Mars is hellish and inhospitable. It’s an intriguing study that, while highly speculative, could give NASA and other space agencies new ideas for what to look for in the ongoing search for past or present life on Mars.

Robots, such as the Perseverance rover, which is set to launch to Mars soon, teach us about life on the surface. This information will be used to guide future human missions to Mars. We’ll also need to outfit spacecraft and astronauts with technologies that will allow them to travel to the surface, explore it, and safely return home. The round-trip mission will take about two years, including time spent in transit (from and back to Earth) and on the Martian surface.

As Above, So Below

The researchers drew parallels with a similar phenomenon on Earth, in which underground radioactive compounds break down water molecules to produce life-sustaining compounds such as hydrogen gas and sulfates.

According to SciAm, this process has sustained subterranean microbes on Earth for millions of years, if not longer, and the researchers believe that the same thing is happening on Mars based on their analysis of Martian meteorites and new data from NASA rovers. Even if there are no radioactivity-fueled alien microbes on Mars today, scientists believe there may have been at some point in the past.

The only thing missing, according to the scientists, is Martian groundwater. If there is water in the cracks and pores of Mars’ subsurface, the radiolysis process could theoretically support alien microbes right now. But that’s a big “if,” according to Rutgers University planetary scientist Lujendra Ojha, who wasn’t involved in the study.

That is not to say that Ojha disagrees with the researchers’ conclusion, but rather that there is no guarantee that groundwater will be found in the Martian subsurface. “Wherever there is groundwater, there could be life,” Ojha explained to SciAm.

Technology development is already underway to allow for a crewed Mars mission as early as the 2030s. Many of the capabilities will be demonstrated first on the Moon during the Artemis missions, while others are better suited for deeper space. Here are six technologies being developed by NASA to make Mars science fiction a reality.

For generations, humans have been fascinated by the possibility of life on Mars. It has inspired countless science-fiction novels and films. Are we the only life forms in the universe, or have other life forms existed within our Solar System? If the current missions to Mars continue, it appears that we will find out the answer very soon.