Ozone is one kind of gas. Three oxygen atoms together constitute one molecule of ozone. The chemical formula is O3. Certainly, you know about the three layers of atmosphere Troposphere, Stratosphere, and Ionosphere. The ozone layer is a belt of naturally occurring ozone gas that sits 9.3 to 18.6 miles above Earth and serves as a shield from the harmful ultraviolet B radiation emitted by the sun. 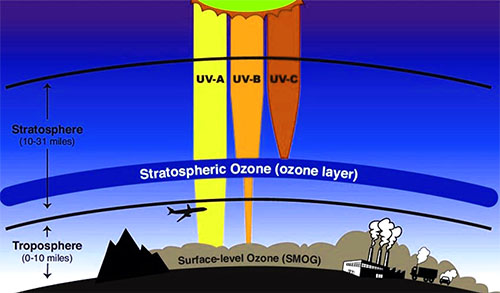 A dense ozone layer exists in the stratosphere zone about 25 to 30 K.M. above the Earth surface. Ozone is also present in the troposphere zone. Ozone is mainly found in two regions of the Earth’s atmosphere. Most ozone (about 90%) resides in a layer that begins between 6 and 10 miles above the Earth’s surface and extends up to about 30 miles (50 kilometers). This layer of ozone surrounds the Earth from all sides. You have learned that from time immemorial this ozone layer has been protecting the living beings of the earth from deadly ultraviolet rays radiated from the Sun.