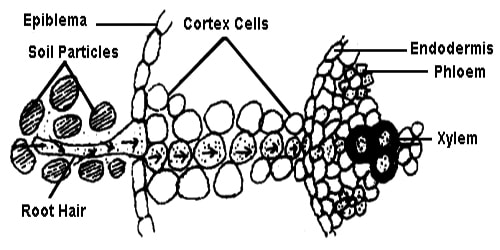 Plants absorb water from the soil by osmosis. Plants absorb water and nutrients through the xylem: a tissue made up of thin tubes located just below the surface of the plant’s stems. They absorb mineral ions by active transport, against the concentration gradient. There are two processes involved in how a plant absorbs water: capillary action and transpiration.

Root hair cells are adapted for taking up water and mineral ions by having a large surface area to increase the rate of absorption. The molecules in this tissue attract water molecules from the soil, so that the water is pulled upwards. This process is called capillary action. They also contain lots of mitochondria, which release energy from glucose during respiration in order to provide the energy needed for active transport. In the case of plants, it’s solar energy that pulls the water upward. Sunlight evaporates the water on the surface of the foliage leading to a process known as transpiration.

Absorption of water by Roots from the soil

The water which plant absorbs: Only capillary water remaining inside the fine spaces of soil particles is absorbed by plants.

Figure: Absorption of water by Roots (Mechanism of Osmosis)

1. Passive absorption
A scientist, named Kramer explained this method. According to him, Diffusion Pressure Deficit (D.P.D.) is made in the mesophyll tissue due to transpiration. The D.P.D. gradually passes through leaf, stem, and root and ultimately reaches the root hairs. As a result, a suction pressure is produced and plants absorb capillary water from the soil. No metabolic energy is required in this process.

Atkens (1916) and Priestly (1921) mentioned the role of osmosis in the process of absorption by root hairs. According to them, absorption takes place due to the variation of osmotic pressure (0.P.) in between the capillary water and the root hair sap.

In this process, the cortex cells become turgid at one time by absorbing water and they again become flaccid when their water is transferred to the adjacent cells. These flaccid cells again become turgid by absorbing water. A pressure produced in the cells by gradually being flaccid and turgid due to osmosis is called root pressure (RP.). The water absorbed by osmosis enters the xylem vessels and from xylem vessels, it reaches the leaf by root pressure (R.P.).

The absorbed water is transported through the roots to the rest of the plant where it is used for different purposes:

What is Wall Pressure?

What types of Minerals do Plants Absorbs?

How many Stages are there in Aerobic Respiration?