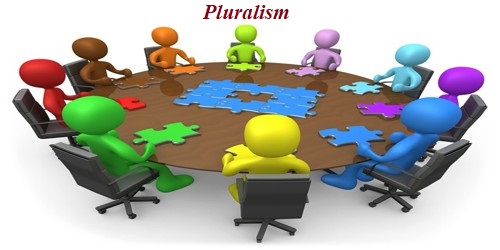 A pluralistic society is any society in which citizens can legally and publicly hold multiple competing ethical views and are allowed to choose for themselves what ethical beliefs if any they wish to hold. It’s one whose influence is drawn from many different sources. It is often mistaken for a society which tolerates different ethical beliefs of people.

Pluralism is a community of people or organization groups were representing the social interests of the group of citizens. It is the basic social framework within which business operates in the United States. It is a condition or system in which two or more states, groups, principles, sources of authority, etc., coexist.

The plurality of religious traditions and cultures has come to characterize every part of the world today. This content refers to diversity, to differences in values and beliefs, and to notions of ‘otherness’.

“A society capable of continuous renewal would be characterized first of all by pluralism by variety, alternatives, choices and multiple focuses of power and initiative. We have just pluralism in this society.” John. W. Gardner.

On other hands, pluralism is a social system in which diverse groups maintain autonomous participation and influence.