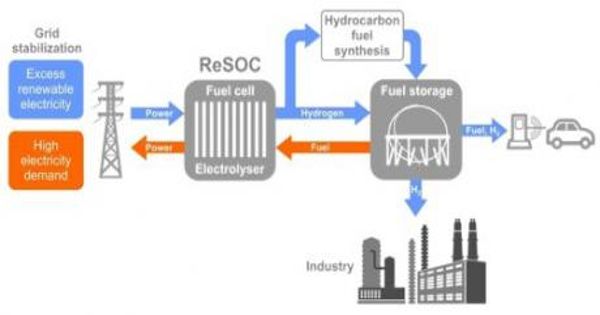 Fuel cells are electrochemical devices that can convert chemical energy into electrical power. They have the advantages of quiet in operation, high efficiency, and low pollutant emissions. For more than five decades, fuel cells have been heralded for their potential as a cost-efficient, environmentally friendly means to convert readily available chemical energy into electric energy.

In the United States, the foremost reason is that the federal government and the fuel cell industry have pursued a host of research programs that never systematically addressed underlying causes of fuel cell challenges, including reliability, longevity, and cost. Fuel cells are singularly remarkable in their potential for efficiently converting the energy locked up in chemical bonds to electrical energy.

Washington State University researchers have made a key advance in solid oxide fuel cells (SOFCs) that could make the highly energy-efficient and low-polluting technology a more viable alternative to gasoline combustion engines for powering cars.

Led by Ph.D. graduate Qusay Bkour and Professor Su Ha in the Gene and Linda Voiland School of Chemical Engineering and Bioengineering, the researchers have developed a unique and inexpensive nanoparticle catalyst that allows the fuel cell to convert logistic liquid fuels such as gasoline to electricity without stalling out during the electrochemical process. The research, featured in the journal, Applied Catalysis B: Environmental, could result in highly efficient gasoline-powered cars that produce low carbon dioxide emissions that contribute to global warming

“People are very concerned about energy, the environment, and global warming,” said Bkour. “I’m very excited because we can have a solution to the energy problem that also reduces the emissions that cause global warming.”

Fuel cells most commonly use hydrogen to generate electricity but can use various other fuels, including gasoline, natural gas, ethanol, and methanol. Fuel cells offer a clean and highly efficient way to convert the chemical energy in fuels directly into electrical energy. Because of their efficiency, fuel cells using carbon-based fuels create less carbon dioxide and no other emissions, such as nitrogen oxide, that would harm the earth’s atmosphere. They are similar to batteries in that they have an anode, cathode, and electrolyte. However, unlike batteries which only deliver electricity they have previously stored, fuel cells can deliver a continuous flow of electricity as long as they have fuel.

In the long run, fuel cell technology can cause a profound change in the quality of life on a global scale. Because they run on electrochemical reactions instead of making a piston do mechanical work, fuel cells can be more efficient than the combustion engines in our cars. When hydrogen is used as fuel, their only waste product is water.

A fuel cell is a device that uses a source of fuel, such as hydrogen, and an oxidant to create electricity from an electrochemical process. Despite the great promise of hydrogen fuel cell technology, however, storing high-pressure hydrogen gas in fuel tanks creates significant economic and safety challenges. There is little hydrogen gas infrastructure in the U.S., and the technology’s market penetration is very low.

“We don’t have readily available fuel cells that can run on a logistic liquid fuel such as gasoline,” Bkour said. All fuel cells have the same basic configuration, an electrolyte, and two electrodes, but there are different types of fuel cells, based mainly on what kind of electrolyte they use.

Unlike pure hydrogen fuel cells, the developed SOFC technology can run on a wide variety of liquid fuels, such as gasoline, diesel, or even bio-based diesel fuels, and doesn’t require the use of expensive metals in their catalysts. Cars powered by gasoline SOFCs could use existing gas stations.

Fuel cells that run on gasoline, however, tend to build up carbon within the cell, stopping the conversion reaction. Other chemicals that are common in liquid fuels, such as sulfur, also stop the reactions and deactivate the fuel cell.

“The carbon-induced catalyst deactivation is one of the main problems associated with the catalytic reforming of liquid hydrocarbons,” Bkour said.

Liquid fuel cell technology has tremendous opportunities for various power-hungry markets, including transportation applications. The researchers are now making bridges with the automotive industry to build fuel cells that can run under real-world and longer-lasting conditions.

Fuel cell technology can spur the development of new classes of energy demand and supply systems, transportation systems, and industrial and manufacturing systems around the globe while generating trillions of dollars in new revenue.

Microsoft’s editors have been replaced with robots