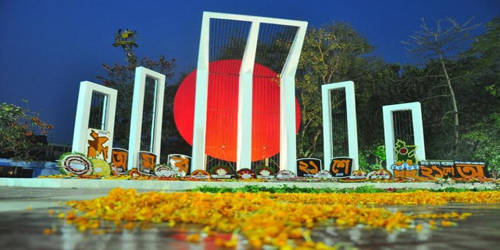 The Central Shaheed Minar was built in honor of the martyrs who were killed in 1952 during the historical Language Movement. It is the national monument of Bangladesh. It is a symbol of freedom, strength, and unity. It is located at the premises of the University of Dhaka, beside Dhaka Medical College. Hamidur Rahman was the architect of this monument. The Shaheed Minar is not simply a memorial but something more. It is of great importance and significance in our national life. It was built to tribute the martyrs who gave up their life for language. The Language Movement martyrs are remembered at the Shaheed Minar every year.

Thus the Shaheed Minar stands for the unified aspirations of Bengali identity and nationalism. It is a unique example in the whole world that the heroic sons of this soil sacrificed their lives for the cause of the mother tongue. A replica monument is situated in the Altab Ali Park in the Tower Hamlets of East London and another is found in the Westwood neighborhood of Oldham. When we stand before a Shaheed Minar, we feel honored having the Bengali Identity. Our heart lifts with pride for those brave sons who had sacrificed their lives for our mother tongue. Every year, the Language Movement is remembered at the monument.