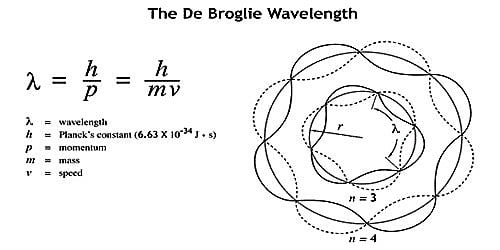 In 1923, Louis de Broglie, a French physicist, projected a proposition to explain the theory of the atomic structure. By using a series of substitution de Broglie hypothesizes particles to hold properties of waves.

where λ is wavelength, h is Planck’s constant, m is the mass of a particle, moving at a velocity v. de Broglie suggested that particles can demonstrate properties of waves.

Significance of de-Broglie Waves: The wave nature of matter, however, has no significance for objects of ordinary size because the wavelength of the wave associated with them is too small to be detected. This can be illustrated by the following examples.

This value of λ can be measured by the method similar to that for the determination of the wavelength of X-rays.

This wavelength is too small to be measured, and hence de-Broglie relation has no significance for such a large object. It seemed reasonable to wonder if electrons could also have a dual wave-particle nature.

Objects of everyday understanding, however, have a computed wavelength much lesser than that of electrons, so their wave properties have in no way been detected; recognizable objects show only particle behavior. De Broglie waves play a substantial role, therefore, only in the dominion of subatomic particles. It is only for very tiny objects like electrons that the concept really has much significance.

Thus, de Broglie concept is significant only for sub-microscopic objects in the range of atoms, molecules or smaller sub-atomic particles.

Although de Broglie was credited for his hypothesis, he had no definite investigational confirmation for his assumption. In 1927, Clinton J. Davisson and Lester H. Germer shot electron particles onto a nickel crystal. What they saw was the diffraction of the electron similar to wave’s diffraction against crystals (x-rays). In the same year, an English physicist, George P. Thomson fired electrons towards thin metal foil providing him with similar results as Davisson and Germer.

The wave-like nature of light is having two accommodating investigational proofs as suggested in the De Broglie hypothesis. The experimental proofs are –

Difference between a Particle and a Wave