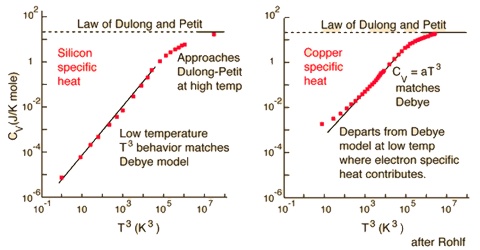 The Specific Heats of Solids (Dulong and Petit’s law)

Dulong and Petit in 1819 observed that at room temperature and atmospheric pressure the product of the specific heats, CP and the relative atomic masses of Solid elements, mostly metals, are approximately 26.8 J deg-1. This is known as Dulong and Petit’s law. The product is also known as atomic heat or heat capacity, CP. There are, however, many exceptions to the rule, e.g., Boron and Carbon (diamond) for which this product is 10.5 and 5.6 respectively. 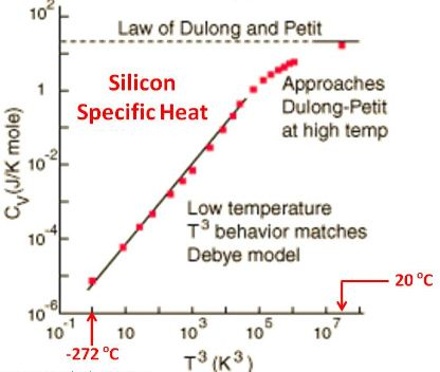 Dulong and Petit’s Law was extended by Kopp and others to compounds. They observed that the product of specific heat of a compound and its molecular mass is approximately equal to the sum of atomic heats of the constituent atoms.

In spite of their limitations Dulong and Petit’s Law and Kopp’s rule were very useful in determining the atomic muses of many elements, e.g., uranium, indium, mercury etc.

Data in table shows approximate constancy of atomic heats of many solids: 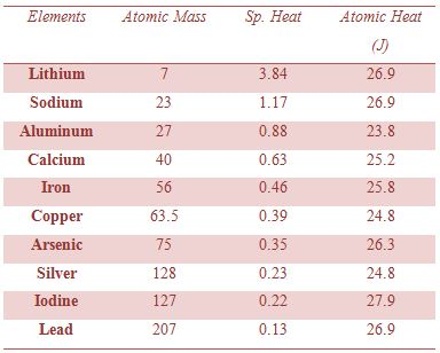 Dulong and Petit’s law received some theoretical support as the value of approximately 25.06 joules for atomic heat at constant volume could be derived by considering the atoms in the solids to execute vibration motion about their fixed positions in the crystal lattice. For solids CP and CV do not vary to any great extent. According to this treatment C, should be independent of temperature. Measurements of heat capacities at low temperatures showed, however, that CV, decreases with the decrease of temperature and approaches zero at 0oK as shown in Figure. Explanation for the low values of CV at very low temperatures was given by Einstein and Debye in terms of Planck’s quantum theory. According to Debye’s theory of specific heats, at low temperatures CV is given by; 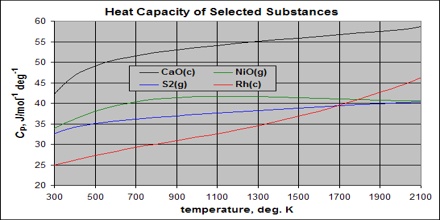 The equation is valid below temperatures of about 15 K where measurements do not yield accurate results. The relation is very useful in calculating specific heats at such low temperatures. Predictions of Debye’s theory are in excellent agreements with experimental results. The theory also predicts that heat capacities of all solids will approximate to shout 25.1 J deg-1 at sufficiently high temperatures, which may be different for different elements. In fact those elements which deviate from Dulong ad petit’s law at room temperature are found to have atomic heats in agreement with the law at sufficiently high temperature.

Microwave Synthesis for Preparation of Crystal

Sol-Gel Method for Preparation of Crystal