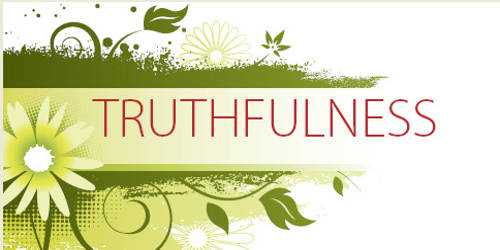 Truthfulness is a great virtue. It means the quality of speaking the truth. It is stating the whole fact. It is the habit of speaking of things as they are. It is essential to winning other’s confidence. It brings respect. Without it, other good aspects of human character bear no value. It helps one to prosper in life. It wins real friends. We all should sincerely cultivate the virtue of telling truth from early childhood.

Truthfulness wants us to tell the actual happening without adding or concealing anything. The habit of speaking the truth greatly influences the formation of character. In every walk of life, we may fall into the temptation to tell a lie. It ennobles one’s character and gives one a high position in society. By telling a lie, one can become successful in one or two occasions but ultimately it becomes known to everybody of the actual fact. He is always fearless, sincere and straightforward. When he is exposed everybody recognizes him as a liar. To tell a lie is a great sin. Nobody trusts a liar. A truthful man not only makes his life fruitful but also helps others to experience the beauty of life. The true happiness and prosperity of man entirely depend on it. For his truthfulness, he may suffer temporarily, but he is sure to gain success in the long run.

Truthfulness is a quality that is very difficult to maintain. The habit of speaking the truth must be formed from childhood. All the great men of all the ages of all countries possessed this quality. Mothers should always encourage their children to speak the truth about whatever offense he might have done. Because a habit formed in childhood is never lost and bears its fruits in the long run. A mother can reward a child for speaking the truth so the child will be inspired to speak the truth. It can lead the whole world to peace and prosperity. Sometimes parents become unnecessarily harsh with the children. So they can nil some facts or add something to it. In this way, they form the habit of telling a lie. Parents must be very careful about forming the habit of speaking the truth in their children. To most people, something is true only because religion declares it to be true. This tendency has narrowed the scope of truth. Truthfulness is the stair to success. It rewards us here and hereafter.