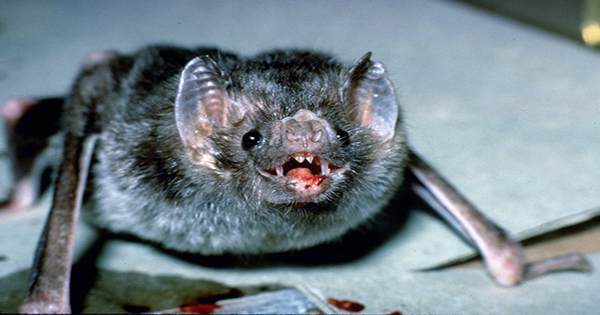 Obtaining adequate wounds to suck blood from is a daily challenge for vampire bats (Desmodus rotundus), but new research has showed that these critters may share information to improve their chances of finding a meal by meeting up with friends while out on the prowl.

Researchers in a new study were able to verify that female bats will meet up with and remain in close contact to bats they are familiar with while foraging by combining observations with data from tiny, bat-sized monitoring devices. According to the researchers, the data support the existence of social relationships among vampire bats, suggesting that having a few buddies pays off in more ways than one.

50 female common vampire bats (27 wild, 23 ex-captive) were released into a cattle pasture in Tolé, Panama, with microscopic trackers attached to their backs for the study, which was published in the journal PLoS Biology. While most bats went to the roost on their own, the monitoring data revealed that tightly attached females would join up with their friends while out on the wing.

Bats that were popular in the roost were also known to forage with a larger group of companions. And, in case you’re wondering how one socializes while seeking blood, the tracked bats were spotted doing so in a few different ways.

In an email to IFLScience, research author Simon Ripperger noted, “We’ve seen various different scenarios.” “Three bats were feeding on three distinct cows at the same time, and the animals were barely 5-10 meters away. We noticed two bats feeding on the same cow’s wounds, although they were from distinct wounds. Vampire bats can even share the same wound and drink from it.” What a joy?

Furthermore, the scientists analyzed audio recordings of foraging bat sounds in La Chorrera, Panama, and discovered three unique call kinds, one of which was previously unknown to science. An n-shaped feeding call, an aggressive ‘buzz’ call, and a downward sweeping social call were all reported.

While the specific meanings of these noises are still being debated, the researchers believe they have understood the motive behind such a social approach to blood hunting in groups. They believe the bats may communicate information regarding the location of hosts and where a puncture is located on their bodies to make the hunt for an entry place easier. This type of collaboration with trusted persons will save time and energy spent looking for food, and they will be able to exchange wound sites instead of having to dig out a new one.

“Vampire bats have a hard time converting the blood they drink into fat storage,” Ripperger added. “A vampire bat, as a result, must obtain food every couple of days. Finding prey, opening a wound, and drinking from it, on the other hand, is a difficult task. As a result, foraging bats frequently return to their dayroost hungry.