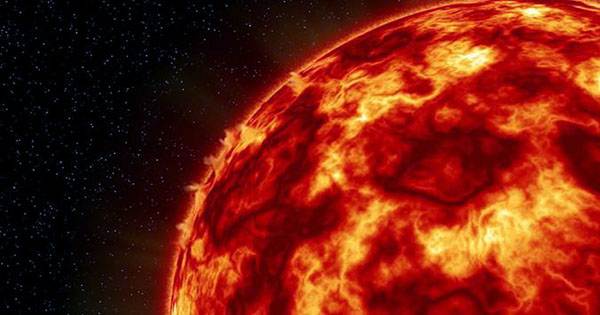 The Sun had a lot of activity on October 9 that directly aimed at Earth. Our star ejected a coronal mass ejection and an M1.6 outburst (CME). On October 12, a flood of rapid electrically charged particles hurled at our globe. NASA has provided insight into the strange occurrence.

These flares and CMEs can be harmful, but this time was fortunately not the case. The flare was several hundred times weaker than the most intense one ever recorded, and considerably weaker if the estimate for the 1859 “Carrington event” – the largest geomagnetic storm in history – is taken into account. The auroral activity at the poles increased because of this week’s event.

CME particles are carried towards the poles as they interact with the Earth’s magnetic field. There is a chance they will slam into the atmosphere and release light. These are the Aurorae Borealis and Australis, or Northern and Southern Lights, respectively.

Northern lights were visible as low as the north of England in Europe and the northern regions of Iowa and Nebraska in the United States during the night of October 11 and 12. In the southern hemisphere, the sight was limited to Tasmania and New Zealand’s Southern Island (Aotearoa).

The display was fully enjoyed at higher latitudes, with swirling aurorae dancing across the night skies of both hemispheres. The events of the last few days have been documented in stunning photographs. To get an idea, look at the Northern Light tag on Instagram.

The event was stunning from space. The flare emitted directly at us, according to NASA’s Solar Dynamics Observatory, blazing brightly and easily outshining the surrounding region. Another NASA mission, however, demonstrates the magnitude of the event in all of its glory STEREO-A. Because it is further ahead of the Earth’s orbit, this observatory can see the Sun from the side.

In addition, based on the observation from last week the powerful CME that launched at our planet is definitely visible. The CME particles were traveling at 983 kilometers per second at the time of release, according to NASA’s Moon to Mars Space Weather Operations Office (610 miles per second).