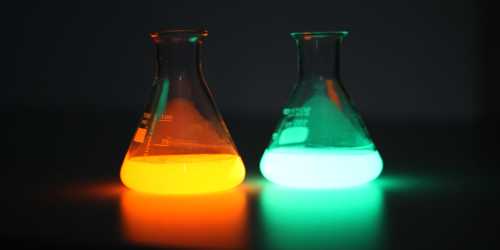 Chemiluminescence is the phenomenon of emission of light as a result of certain chemical reactions. The slow oxidation of white phosphorus is an example. Other examples of Chemiluminescence are the oxidation of decaying wood containing certain forms of bacteria, fire-flies etc. The oxidation of 3-aminophthalic cyclic hydrazine commercially known as luminal, by hydrogen peroxide in alkaline medium is accompanied by a bright green luminescence.

Chemoluminescence is the term for light that’s emitted as a product of chemical reactions. Chemiluminescent reactions produce unstable products, which then decay in order to form more stable products. In the process, energy is emitted in the form of light.

Radiation of short wavelengths, such as x-rays or γ-rays, produces luminescence in solids. When x-rays are passed through sodium chloride the crystals become yellow and potassium chloride shows blue color. Such phenomena are considerably more complicated than simple luminescence.

Chemoluminescence has a number of significant applications. A remarkable example is the use of luminol in forensics. Luminol reacts with tiny amounts of iron to produce luminescence. Detectives use this property at crime scenes, by spraying luminol on surfaces to detect the presence of blood, which is rich in iron. It is also found in some fungi and earthworms. It is most common, however, in the oceans, where many organisms, from fish to worms living at great depths, have glowing organs. Chemists have exploited these light-emitting reactions as markers in a large number of laboratory and clinical tests.