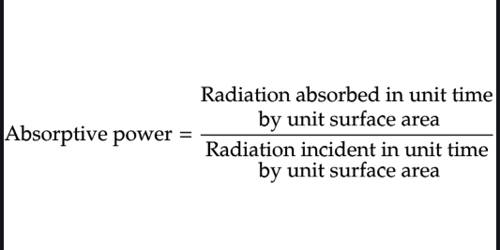 The absorptive power of a body (or a surface) is defined as the ratio of the energy absorbed in a given time (or in a certain time) to the radiant energy incident on it at the same instant of time. It is a measure of heat absorbed by an object. When heat is incident on the surface of the body some of the heat is absorbed while other is reflected.

When heat is incident on the surface an object, a part of it is absorbed and the remaining part is reflected. The absorptive power of a black body is 1 because it absorbs the radiant energy of all wavelength incidents on it. A good absorber is a good radiator. Usually, the absorbed radiation is converted to thermal energy, increasing the object’s temperature.  A Black body, for instance, absorbs all incident radiation, and its absorptive power is 1. So, the body which has higher absorptive power has a higher emissive power also. The amount of heat absorbed by the body depends upon the nature of the body.

Absorptive power of a body is defined at a given temperature and wavelength is defined as the ratio of the amount of heat energy absorbed to the amount of heat energy incident on it in a wavelength range. Scientists make use of this thermal energy for producing electricity. Absorption is the most proficient mode of converting low-grade heat into electricity.  There are other uses as well. The continuous-cycle absorption cooling unit is operated by the application of a limited amount of heat. This heat is furnished by gas, electricity, or kerosene.

What is Solar Constant?

What do you mean by global warming?