The density of a substance is its mass per unit volume, usually measured in g cm. The graph below shows the variation in density (at room temperature) across Period 3. 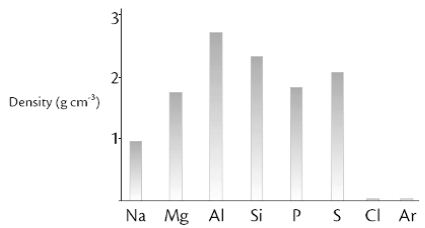 Phosphorus and sulphur atoms are heavier than silicon atoms so we might expect their densities to be higher. However silicon is a giant covalent network of tightly packed atoms whereas the P4 and S8 molecules are only loosely held by Van Der Waals forces, so they are further apart.

Chlorine and argon are gases at room temperature. The chlorine molecules and argon atoms are well spread out so their densities are very low.