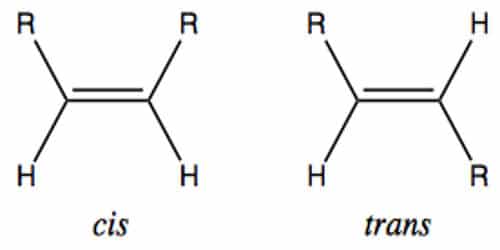 Geometric isomerism (also known as cis-trans isomerism or E-Z isomerism) is a form of stereoisomerism. They are molecules that are locked into their spatial positions with respect to one another due to a double bond or a ring structure. In chemistry, the two most common types of geometric isomers are those arising from a double bond and those arising from a ring structure. Cis and trans geometric isomers exhibit different properties, including boiling points, reactivities, melting points, densities, and solubilities.

(i) In geometrical isomerism, free rotation of bonds in the compound should be blocked. This is possible only in —

(ii) The boiling point of trans-isomer is greater than the cis-isomer. The Latin prefixes cis- and trans- indicate how the groups attached to the double bond are arranged in space with the cis meaning the same side and trans meaning opposite side.

(iv) Cis-isomers have more solubility, dipole moment and higher refractive index than that of trans isomers. Trends in these differences are attributed to the effect of the overall dipole moment.

(v) In the case of a dicarboxylic acid, cis-isomer can easily form acid anhydrases by releasing one molecule of water. Trans-isomer never does it. E.g. Maleic acid & Fumaric acid. In alkenes, trans isomers have higher melting points, lower solubility, and greater symmetry than cis isomers.

Geometric isomers have similar structural formulas but differ in the arrangement of groups at a single atom, at double bonds, or in rings. They are chemical species with the same type and quantity of atoms as another species, yet having a different geometric structure. Cis- and trans-platin are examples of geometric isomers based on the different arrangements of groups at a single atom. Cis- and trans-2-butene differ in the arrangement of the methyl groups about the double bonds.