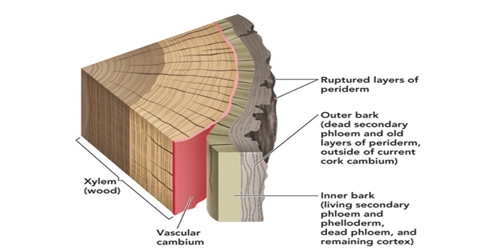 The bark is the outer covering of a tree’s trunk and branches. Its purposes are conserving water and protecting the tree’s essential living systems from temperature extremes and storms as well as from attacks by diseases, animals, and insects. Bark also transports food and water throughout the tree. Severe bark damage will kill the tree.

(ii) As the cork cells do not get any supply of water and food from the Inner conducting tissue, they gradually dry up and die and the dead cells are commonly known as bark. Thus, the dead cells form a hard layer around the stem. This hard coat which formed outside the cork cambium or phellogen known as bark.

The bark is of two types; such as- 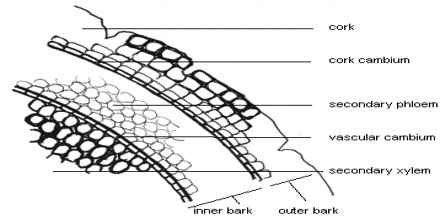 The bark is a waterproof protective layer present on the trees to prevent the loss of water through evaporation. Since it majorly consists of dead cells, it forms a rigid covering that protects the interior of the plant from the entry of harmful micro-organisms, mechanical injury, high temperature, etc.

Functions: Trees use their bark for different purposes, but mainly for protection against water loss and predators. Insects and herbivores want to eat the leaves off woody plants. These plants are often protected by thick bark past where local herbivores can reach. The outer bark, which the compressed cork layers, is also waterproof. This helps keep the inner bark from drying out and ensures the plant can continue to move sugars from the leaves to where they are needed.

(i) It protects the plant from excessive heat and cold,

(ii) It reduces the rate of evaporation

(iii) It protects the inner tissue from dryness

(vi) The inner bark is composed of living tissues, which help translocate the sugars created in the leaves to other parts of the plant.

Formation of Female Spore of Plants