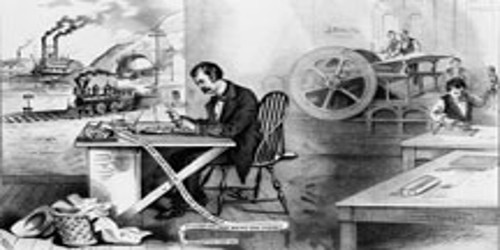 By 1860 all the necessary elements were present to support the sweeping social and economic change that occurred during and the following civil war. In a number of ways, the war itself stimulated combinations of social, political, and economical torches necessary for large-scale industrialism. The demands of war and two expansions, however, integration and mechanization were expensive and depend upon the availability of adequate capital and credit resources. The intercontinental railroad system which was built after the war and the accompanying disposal of public domain provided further dimensions to industrial development.

The Robber Baron’s- “However for tuitions circumstances surrounding the civil war might have been it is doubtful that America would have experienced that rapid industrial development it did had there not emerged a group of men. Who had vision drive, ambition, and capabilities to recognize the potentials and take advantage of the opportunities? The Robber Barron’s believed that wealth should not remain idle but should be used to create a room of wealth made massive capital accumulations possible and should use of these capital accumulations created unperfected economic growth for America.

Shannon and Weaver Model of Communication

Importance of memo in a large business organization