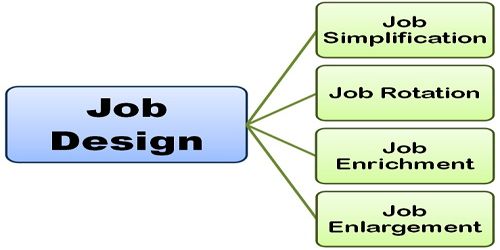 Job Design is the work arrangement (or rearrangement) aimed at reducing or overcoming job dissatisfaction and employee alienation arising from repetitive and mechanistic tasks. It is important for an organization to perform the organizational activities in the most efficient and effective manner. 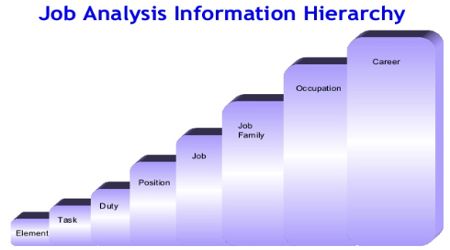 A Job Element is the smallest segment unit into which work can be divided. Putting the tomato on a hamburger is an example of an element in the job of a fry cook at McDonald’s.

A task is distinct work activity tallied out for a distinct purpose. Examples would include typing a letter, preparing a lecture, or unloading a mail truck.

A duty is a number of tasks. Counseling students is a duty if a college instructor.

A position refers to one or more duties performed by one person in an organization. There are at least as many positions as there are workers in the organization; vacancies may create more positions than employees. Examples of positions include Supervisor Grade IV, according to Payable Clerk I.

A job family is a group of two a more jobs that either calls for similar worker characteristics or contain parallel work tasks as determined by job analysis. At the previously mentioned insurance company, service clerks and policy correspondents represent two jobs that frequently are placed in a common job family because they have man’s similar worker characteristics.

An occupation is a group of similar jobs found across organizations. Electrician, accountant, and service maintenance engineers are some examples.

A career represents a sequence of positions, jobs, or occupations that a person has over his or her working life.

Role of Communication in Management