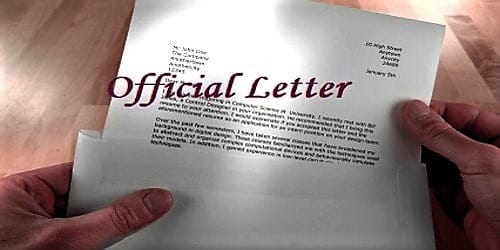 In general, the letter that contains official information and message is known as an official letter. This letter is generally written for conveying various official messages such as rules, regulations, procedures, orders, actions, reactions, opinions, etc. from one organization to another; or from one department to another; or from one individual to another individual. In writing this letter, official structure, rules, and procedures are strictly followed and maintained. There is no scope of presenting any emotional or personal message in this letter.

These type of letters are used in our day to day life such as application for various posts, jobs, applying for leave or permission and to the officials, making complaints or requesting them of some compulsion, approval, etc. These letters also should have a formal method and written plainly and accurately. Its demand is worldwide and broadly used.

An official letter may be of various types depending on its contents, purposes, features, and nature of the organization. The main types of letters are:

Features of an official letter – Features of this type of letter can be mentioned as follows:

In conclusion, we can say that official letter refers to the letter that is written formally for conveying official messages by one office, department or individual to other offices, departments or individual.

How can manager link strategy to ethics and social responsibilities?