Oil and gas in a deep well are of course significantly higher in temperature than ambient. Natural gas, associated or non-associated, on cooling releases hydrocarbon up to about C5 in liquid form and this is called natural gas condensate’. Where non-associated gas is high in condensate the field from which it comes is known as a condensate field; there are several such in the southern part of the UK sector of the North Sea. Condensate from associated gas is usually combined with the liquid stream for piping to a terminal. Condensate can be blended with gasoline and this occurs in countries including New Zealand. Hence coverage of condensate in this part of the book is appropriate. The same physical properties that have been discussed for gasoline will be outlined for condensate in this appendix. 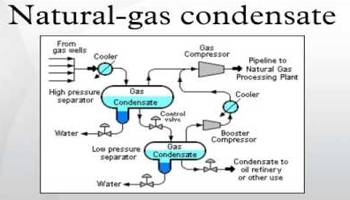 Natural gas condensates vary widely in the balance of the respective constituents, therefore their densities also vary widely. Range of 620 to 760 kg m-3 (97 to 55 °API). The kinematic viscosity of a particular condensate at 30°C was measured as 0.7 cSt, making it less viscous than water which has a value at 30°C is 0.8 cSt. Its Reid vapour pressure is in excess of 2.5 bar.