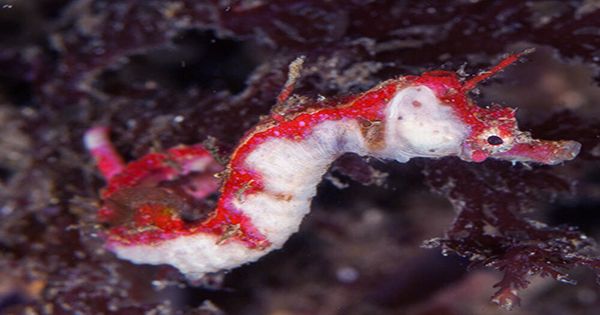 A new pygmy pipehorse species has been discovered in New Zealand waters for the first time, and it has given a Mori name in another world first. This is the first time an indigenous community has been involved in the formal scientific naming of a new animal species, according to experts. The tiny candy cane-like pipehorse, a related of both seahorses and pipefish, has been called Cylix tupareomanaia by authors Graham Short and Dr. Thomas Trnski, in conjunction with kaumtua (senior leaders) of Ngtiwai, in the journal Ichthyology and Herpetology. Short and Trnski invited the chiefs of Ngtiwai’s rohe (customary territory) to share in the naming of an animal that was new to science but well known to their iwi.

Because of the cup-like crest on the top of its head, which is not found in any other pygmy pipehorses, the new genus name, Cylix, originates from the Greek and Latin words for chalice or cup. The species name tupareomanaia, also known as Tu Pareo Manaia, means “manaia’s garland.” Manaia is the Mori term for a seahorse, and Tu Pareo Huia (Home Point) at Whangaruru on Aotearoa New Zealand’s North Island is where the type sample was discovered. The crest on the pipehorses heads also known as the garland.

In a statement, Dr. Trnski, head of Natural Sciences at Tmaki Paenga Hira Auckland Museum, said, “I feel honored that we have been able to use mtauranga Mori [knowledge] in the name of Cylix tupareomanaia and partner with Ngtiwai for this taonga [treasure] of the ocean.” “As far as we know, this is the first animal in the world to have a tribal name assigned by the naming authority.” Traditional knowledge that can aid in the discovery of new species is long overdue for acknowledgment.”

The manaia pygmy pipehorse (as it will know) grows up to 6 centimeters (2.36 inches), roughly the size of your little finger, and comes in a variety of colors. It is skilled at concealing in the fine seaweed of the northeast coast’s stony reefs.

Divers in the Poor Knights Islands Marine Reserve around a decade ago first discovered it, but it misidentified as another seahorse species until 2017, when Crispin and Irene Middleton informed Short, a research associate at the California Academy of Sciences and the Australian Museum, that they had discovered something new.

“I was ecstatic since here was my chance to look at it thoroughly. So we got the specimen with the help of Tom Trnski of the Auckland Museum, and after analyzing it under the microscope, I recognized it wasn’t a seahorse but a new species and genus of pygmy pipehorse “IFLScience spoke with Short.”The angled head and prehensile tail of pygmy pipehorses and seahorses are deceptively similar in appearance, they do. However, differ in a number of ways, the most notable of which is the appearance of the head. The head of most pygmy pipehorses has a conspicuous bony ridge, whereas the head of seahorses has a distinct bony coronet. On its head, the new species possess a characteristic bony coronet… However, CT scans of the head’s skeletal anatomy reveal that the coronet is made up of bones that are fundamentally different from those seen in seahorses.”

It is not just a new pygmy pipehorse, but it’s also the first to be discovered in New Zealand waters. “They have five species of pygmy pipehorses in nearby Australia, where fish diversity in this family (Syngnathidae) is fairly significant,” Short remarked. “As a result, New Zealand now has its own unique pygmy pipehorse species. This is also a new genus of pygmy pipehorse that is not found in Australia, making it even more unique.” Short and Trnski concluded that now was a good time to ask the Ngtiwai kaumtua for a name in honor of the manaia pygmy pipehorse’s unusual location. The Manaia is a tupuna (ancestor) who appears frequently in Mori carvings and jewelry.

“The naming of this taonga is significant to Ngtiwai because we know there are stories from our tupuna concerning this species,” said Ngtiwai kaumtua Hori Parata. “We are thrilled to have given this species a new name that reflects Ngtiwai’s mana, and we thank the kaumtua for their contribution to this really remarkable piece of art.”