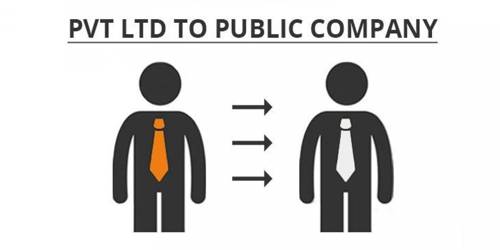 Procedure for conversion of a private company to a public company

A private company means a company which restricts the right of members to transfer its shares and must have a minimum paid up capital which may be prescribed from time-to-time. A public company is a company that has issued securities through an initial public offering (IPO) and is traded on at least one stock exchange or the over-the-counter market.

By Resolution: Section 44 provides the methods by which a private company can be converted into a public company.

By Default: According to section-43, a private company may become a public company by default. The conditions are –

If a private company fails to comply with the essential requirements of a private (viz., limitation of the number of members to 50; restrictions on the transfer of shares, prohibition of invitation to the public to buy shares debentures) it shall cease to enjoy the privileges of private companies and the company will be treated as a public company.

The court may relieve the company from the consequences of non-compliance of the &resold restrictions if it is of opinion that this non-compliance was accidental or was due to inadvertence.

By Creating a Statutory Public Company:

Where not less than 25% of the paid up share capital of a company (Which have share capital) is held by one or more bodies corporate, the private company shall become a public company and the date on which the aforesaid percentage is first held according to section 43A.

Does the principle of indemnity apply to life insurance?